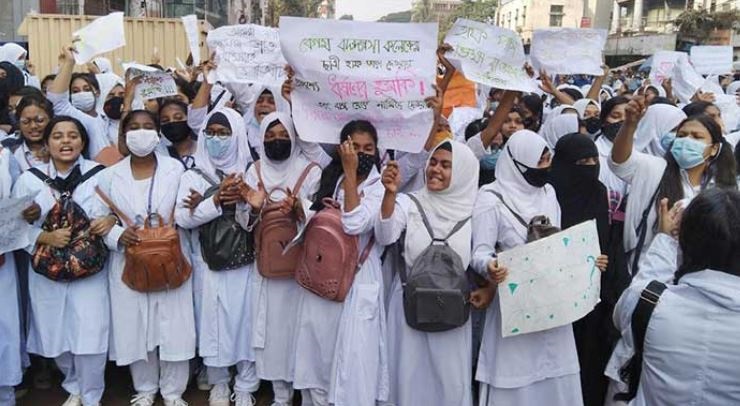 A group of agitating students in Dhaka on Sunday lifted the blockade with a 24-hour ultimatum demanding the arrest of the bus driver’s assistant who threatened to rape after female student offered half fare.

Students of various educational institutions, including Begum Badrunnessa Government Girls College, in the capital lifted the blockade after 12 noon.

Earlier, students of various educational institutions started a protest by blocking Bakshibazar road in the morning, alleging that a female student had been threatened with rape when she offered to pay half fare for the bus.

Witnesses said police prevented students at the college gate of Badrunnessa College in the morning when they tried to bring put march from the campus protesting the threat and demanding half bus fare all students.

Later, when students from other educational institutions of the capital went there, the gates were opened. Shortly after 10 am, hundreds of students marched to Bakshibazar and took position on the road. The traffic was stopped in the surrounding area at that time.

Students allege that a second-year student of Badrunnesa College threatened to rape by a helper of a bus on Saturday when she tried to pay half of the fare at Shonir Akhra in the capital. The students demanded to bring the accused to justice.

Due to the blockade of students, the traffic from Chankharpul to Bakshibazar, Dhaka Education Board and BUET was stopped.

Students were seen holding placards with slogans such as “We want justice,” “Half fare is not begging but our right,” and “Message of rape if you want your rights,” during the protest.