PM urges migrant workers to get prepared before going abroad 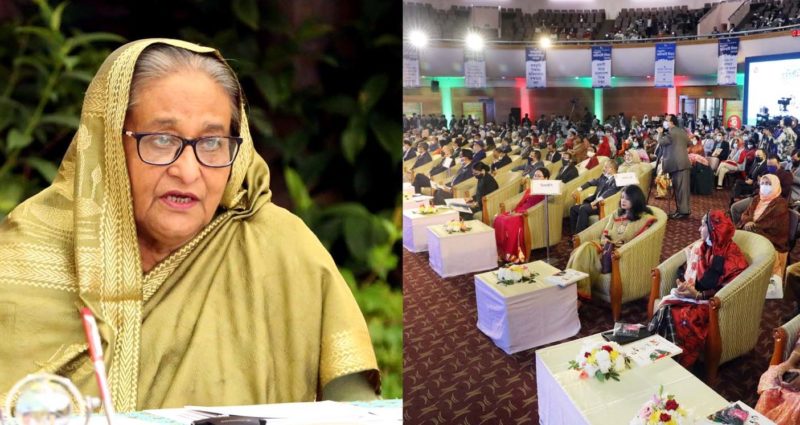 Putting emphasis on the registration of migrant workers, Prime Minister Sheikh Hasina today urged the job seekers to go abroad attaining required skills and having accurate information about their work , averting any allurement of middlemen.

“To this end, the Expatriates’ Welfare and Overseas Employment Ministry and especially the recruiting agents have to play a more responsible role,” she said.

The premier was addressing the opening ceremony of International Migrants Day-2020 at Bangabandhu International Conference Centre (BICC) as chief guest, joining the event virtually from her official residence Ganabhaban.

Sheikh Hasina emphasized on attaining skills and said the migrant workers could earn even more money and secure their jobs if they attain required skills through training before going abroad.

“We’ve already taken sufficient initiatives across the country to prepare the overseas-bound people as skillful for foreign jobs . . . so don’t try to go abroad illegally,” she said.

But, they (workers) do not take the training sincerely rather collect the certificate anyway which put them into trouble in abroad, she noted.

She directed the concern ministries and organizations to strengthen their monitoring to ensure the proper and required training to the overseas-bound workers.

Sheikh Hasina said the people who deal with migrant workers should keep in mind that they are the people of the country and they should be treated with dignity.

“You (ministry and agencies) should ensure whether their jobs are being given properly or provided security, especially to the women . . . I request you all to perform your responsibilities properly for them,” she said.

Asking the migrant workers not to get victimized running after the “golden deer”, the premier said the government has set up digital centers across the country where anyone can register themselves to be migrant workers. “But, you have to keep patience as the government would send all registered persons abroad whenever opportunities come.”

The government maintains a policy to highlight the country’s migrant workers internationally, said the premier, adding that when she visits any country she tell the hosts that Bangladeshi migrant workers are contributing to their economy and development and that is why their importance is immeasurable.

On behalf of the Prime Minister, Imran Ahmad handed over the cheque for education stipend to the children of migrant workers while crests and certificates to three non-resident Bangladeshis for sending highest remittance legally and making the highest investment.

The Prime Minister urged the non-resident Bangladeshis (NRBs) who have been living abroad since long to come up with investment in the country, as the government has created huge opportunities for them such as setting up three banks for NRBs.

“We’ve eased the investment procedure and bringing the money home along with different facilities,” she said, adding “You (NRBs) can make investment to produce digital devices or other equipment here in the country as the government is facilitating you in many ways.”

Sheikh Hasina requested the NRBs and migrant workers to send money to the country through legal channels, mentioning that the government has reduced remittance charge and introduced many options for sending remittance to the country along with giving 2 percent stimulation.

She said the government since 2009 has honored a total of 155 NRBs as CIP for sending highest remittance and investment.

The premier went on saying that her government has been opening labour-wing in the Bangladesh embassies abroad and setting up chancery buildings in the countries where more than 10,000 migrant people are working, for the wellbeing of migrant workers.

Referring to the insurance scheme for overseas-bound workers introduced by her on December 19, 2019 on the occasion of International Migrants Day, she said the government is paying half of the insurance scheme and an initiative has been taken to make this scheme friendlier to the migrant workers.

Earlier, Wage Earners’ Welfare Board (WEWB), as per its policy, used to compensate the families of registered migrant workers by paying Taka 3 lakh for their death, but considering the situation rendered by Covid-19 families of all migrant workers are receiving the compensation, she said.

She said after the killing of the Father of the Nation Bangabandhu Sheikh Mujibur Rahman, the then governments had tried to keep the country depended on others which was disrespectful for Bangladesh.

But, the Awami League after coming to power has been trying to turn Bangladesh into a strong economy and a self-reliant and self-respectful country, she said.

The premier said alongside different mega projects such as Padma Multipurpose Bridge, Rooppur Nuclear Power Plant and many others the government is also setting up 100 economic zones across the country.

“In our country, there would be no shortage of jobs, rather we will need more skilled labourers,” she said.

Sheikh Hasina reiterated the government’s plan to provide house to every homeless person along with cent percent power connection to illuminate all houses in Mujib Borsha.