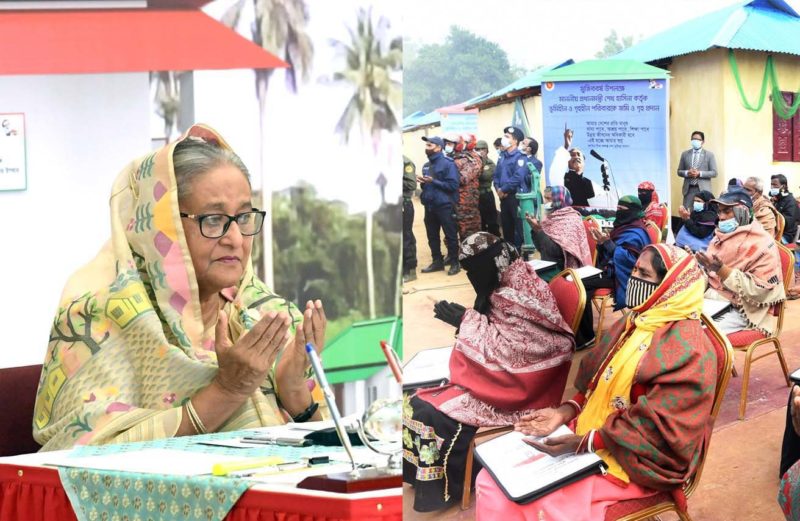 The landless and homeless people who received houses today as the gift of Prime Minister Sheikh Hasina on the occasion of Mujib Borsha burst into tears, saying now they have their own addresses with shelter and praying for a long and healthy life of their premier.

“I am extremely happy . . . I have never been able to construct such a house in my life,” said Parveen of Kathaltala Village at Dumuria Upazila in Khulna District in an emotion-choked voice while talking with Prime Minister Sheikh Hasina through video conferencing.

A sobbing Parveen said: “My husband gets no work. We spend our days without food once and again. We had no house. Never imagined we would have a house. You (Prime Minister) have given us a house and land. You will alive for long.”

Trying to console Parveen, the premier said: “Don’t weep. I think it is my responsibility.”

“No people of Bangladesh will remain homeless and landless and I will ensure it. At the same time, I will also take necessary measures so that you – all the people – can find the ways for life and livelihood,” she said.

Freedom fighter Ashoke Das who was homeless a few days back and spent live in miseries also received a home. He also expressed his heartiest gratitude to the Prime Minister.

In Dumuria Upazila, a total of 140 houses were distributed among the homeless and landless people.

One beneficiary at Nizbari village in Syedpur Upazila, expressing her gratitude to the premier, said she had no land and house “but daughter of Sheikh Mujibur Rahman has given me land, house, everything and I am overwhelmed with joy.”

“I pray – may you (Sheikh Hasina) have a long and healthy life,” she begged to the all mighty Allah.

The beneficiaries also sang a Bhawaiya song that was written for Prime Minister Sheikh Hasina.

Besides, Md Nurul Huda, a CNG-run three-wheeler driver and beneficiary of Ikartali village at Chunarughat Upazila said he is used to live in forest land with his family.

“You (premier) have given me a house with land that might allow me to spend a happy life with my wife and kids,” he said.

Nurul Huda also prayed to Allah for a long and healthy life of the Prime Minister so she could help more destitute, homeless and landless people in the coming days.

In Chunarughat Upazila, a total of 74 houses were handed over to the homeless and landless people.

Later, the premier virtually went to Chapainawabganj district where 340 houses were given.

“I was devoid of an address but now your gift (home and land) has given me an address where I can spend a happy life with my husband and children,” she said.

Fatema also prayed for the premier to Allah so she can help and give a happy life to more people.

Later, they performed a Gambhira song for the Prime Minister expressing their joy.

Prime Minister Sheikh Hasina today inaugurated the distribution of 66,189 houses as part of her government’s campaign to bring all landless and homeless families under housing facility on the occasion of the “Mujib Borsha”.

For the first time in the world such a large number of houses are being distributed among the land and homeless people at a time.

Prime Minister Sheikh Hasina joined the house handing over ceremony virtually from her official residence, Ganabhaban in the capital.

The government has built 66,189 houses at a cost of Taka 1,168 crore for homeless people on the occasion of the Mujib Borsha. Some one lakh more houses will also be distributed among those people in the next month.

Besides, Ashrayan Project under the Prime Minister’s Office (PMO) rehabilitated 3,715 families by constructing 743 barracks under 44 project villages in 36 upazilas in 21 districts during the Mujib Year.