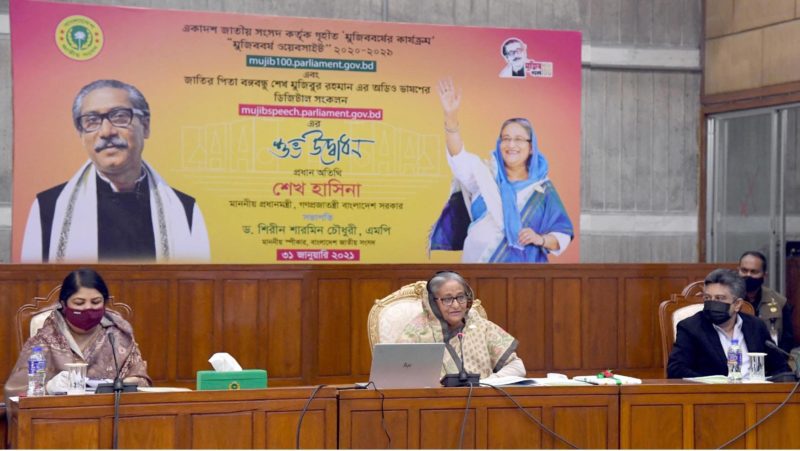 Mentioning that powerful opposition is a must for democracy, Prime Minister Sheikh Hasina said today the opposition parities have failed to earn people’s confidence due to lack of efficient leadership.

“The existing opposition parties have failed to achieve the confidence and trust of the people due to lack of leadership. But there is no doubt that powerful opposition is a must for democracy,” she said.

The Prime Minister was addressing a ceremony as the chief guest marking the inauguration of the Jatiya Sangsad’s Mujib Birsho programme, Mujib Borsho Website 2020-2021 and digital edition of the speech of Father of the Nation Bangabandhu Sheikh Mujibur Rahman at the Jatiya Sangsad Bhaban here.

The premier said the parliament has a role in the continuation of the country’s democracy as the representatives of the people get the scope to say something here about the welfare of the people.

Sheikh Hasina, also the Leader of the House, said that her government is not creating any sort of problems in running the parliament, but they have worse experiences while they were in opposition.

The Prime Minister thanked the Speaker for running the parliament in a neutral manner and thus attaining global recognition.

Stating the attempts made by the governments of Ziaur Rahman, Ershad and Khaleda Zia to erase the name of the Father of the Nation, she said, “It is proved that history can never be erased. ”

The Prime Minister said that the new generation now knows the true history of the Liberation War after 21 years.

The true history would inspire the new generation to be patriots, she continued.

She said that the governments of Zia, Ershad and Khaleda have destroyed many documents to erase the name of Bangabandhu from the history of Liberation War and the Language Movement.

The Prime Minister said her government has already published seven volumes of the 14 volumes of documents of the Pakistani intelligence agencies which were mainly against Bangabandhu.

One can know the real history of the country’s independence from reading the volumes, she added.

Sheikh Hasina, eldest daughter of Father of the Nation, said that she has been preserving all the visitors’ books with comments of the head of governments and states of different countries and also the commoners so that the people can know many things about the history from those.

The Prime Minister thanked all concerned especially the Speaker for taking various programmes marking the Mujib Borsho for celebrating the birth centenary of Father of the Nation, particularly launching an website having various speeches, pictures and information about life of Bangabandhu.

“I personally believe that the website will be important and timely for the researchers,” she continued.

The Primer said they have extended the Mujib Borsho till December 16 this year as they have a plan to take extensive programmes to observe the Golden Jubilee of the country’s independence and the birth centenary of Father of the Nation if the coronavirus situation improves in the days to come.

Bangabandhu had a dream to give the Bangalee nation a separate country and bring smile in the faces of the people to change their lots by giving them a beautiful life free from hunger and poverty, she said.

The Prime Minister said Bangabandhu was not able to materialize his dream completly as he was murdered along with most of his family members on August 15 in 1975.

She said her government has been working untiringly to implement the dream of Father of the Nation.

JS Speaker Dr Shirin Sharmin Chaudhury and Nabil Ahmed spoke on the occasion while Chief Whip Noor-E-Alam Chowdhury was present on the dais.