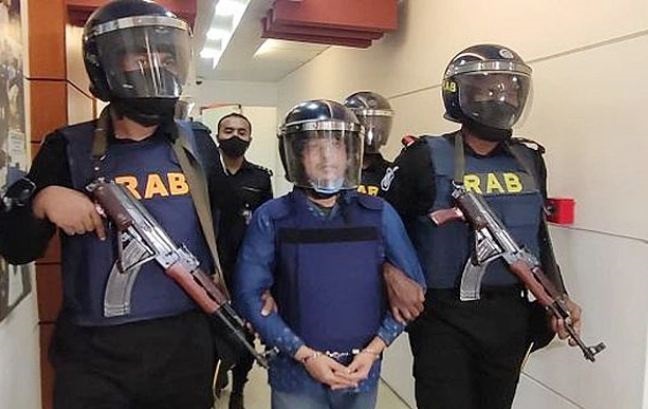 Fugitive convict Iqbal was directly involved in August 21st grenade attack that was launched in 2004 targeting Awami League President Sheikh Hasina, the then opposition leader at the parliament.

“He hurled grenade aiming to the stage during the incident as per the direction of militant leader Mufti Hannan,” said Rapid Action Battalion’s director general Chowdhury Abdullah Al Mamun.

Iqbal was staying in the country and foreign countries in disguise. He changed his name and profession while living in foreign countries, the RAB DG disclosed the information at Karwan Bazar media centre on Tuesday.

A team of the elite force arrested Iqbal, who has been given life term imprisonment in the case filed over the grenade attack on an Awami rally, from Diabari area in the capital on Monday night. His village home is in Jhenidah. He has been absconding for a long time.

Some 15 convicted accused are still absconding while 33 are in prison.

Sheikh Hasina was the last speaker of the rally to protest against violence and terrorism. As soon she ended her speech and posed for photos at the requests of journalists, grenades started raining down all around.

A day after the attack, police filed a case with Motijheel Police Station against unnamed people.