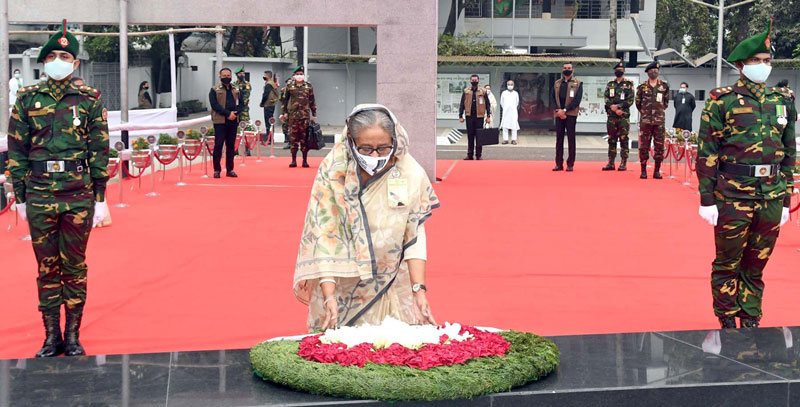 Prime Minister Sheikh Hasina on Sunday paid rich tributes to Father of the Nation Bangabandhu Sheikh Mujibur Rahman on the occasion of the historic March 7.

The premier paid the homage by placing wreaths at the portrait of the Father of the Nation in front of Bangabandhu Memorial Museum at Dhanmondi in the city this morning, reports BSS.

After placing the wreaths, she stood in solemn silence for some time as a mark of profound respect to the memory of Bangabandhu, the architect of the independence.

Sheikh Rehana, younger daughter of Father of the Nation Bangabandhu Sheikh Mujibur Rahman accompanied her sister and Prime Minister Sheikh Hasina while a munajat was offered praying salvation of the departed souls of the August 15, 1975 martyrs.

On this day in 1971, Bangabandhu through his fiery and soulful address made a clarion call to the people to fight against the Pakistani occupation forces to achieve the long-cherished independence.