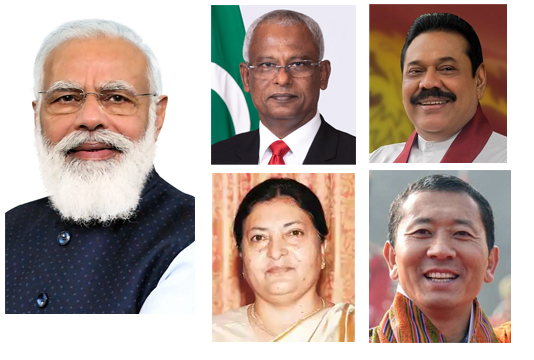 Bangladesh is set to stage a grand celebration to mark the golden jubilee of its 1971 independence, drawing five heads of state and government from South Asia region, including Indian Prime Minister Narendra Modi.

“Indian Prime Minister Narendra Modi and four heads of state and government from Nepal, Sri Lanka, Bhutan and the Maldives will be among the distinguished foreign guests to join the celebrations under separate schedules,” government’s principal information officer Surath Kumar Sarkar told BSS.

He added that the foreign heads of state and government would join separately some identical programmes as part of the celebrations while Modi’s visit would be an extended one which would take him to three places outside Dhaka in Bangabandhu shrine in Tungipara.

Sarkar said the foreign state and government heads would arrive and depart Bangladesh on different dates on the third week of the March while Modi was set to join the main Independence Day celebrations on March 26.

Foreign minister Dr AK Abdul Momen in a subsequent media briefing said Prime Ministeer Sheikh Hasina would hold talks with all visiting heads of state and government “but the main thrust of their tours was to join our celebrations”.

Momen said he called the media briefing particularly to dispel media speculations about possibility of talks between Bangladesh and Indian premiers.

He said Sheikh Hasina would hold the talks with her Indian counterpart on March 27, the second day of Modi’s tour while all major bilateral issues were expected to feature their meeting.

The minister said the talks between Sheikh Hasina and the visiting South Asian leaders were expected to yield several memorandums of understanding (MoUs).

He said foreign diplomatic channels suggested Chinese, Canadian and French heads of government and some high-level leaders of different countries like Japan and the United States would send video messages congratulating the government and Bangladeshis on the occasion of the golden jubilee cerebrations.

Bangladesh’s golden jubilee celebrations coincide with the birth centenary celebrations of Father of the Nation Bangabandhu Sheikh Mujibur Rahman which would take the foreign dignitaries to Bangabandhu Museum.

The museum is actually the private residence of the country’s founder where he was killed in a 1975 coup along with most of his family members while his elder daughter incumbent Prime Minister Sheikh Hasina and Bangabandhu’s younger daughter Sheikh Rehana incidentally survived the carnage.

They were on a brief tour in Germany at the time of the putsch which also killed the Bangladesh founder’s 10-year child Sheikh Russell.

According to the schedule, all the foreign leaders would visit National Memorial in Savar to pay homage to the independence martyrs, watch special military parades, join state banquets and visit the Bangabandhu Museum.

“But the Indian premier is also set to visit Bangabandhu shrine at (his village home) in Tungipara and two Hindu temples outside Dhaka — one in Gopalganj and the other in Satkhira,” Sarkar said.

The temples are places of worships, particularly of the Hindu Matua community, a large part of them being residents of India’s West Bengal state.

Maldivian President Ibrahim Mohamed will be the first top foreign dignitary to arrive on a three-day Bangladesh tour on March 17 who will be followed by Sri Lankan’s premier Mahinda Rajapaksa to arrive on a two-day tour from March 19.

Modi will arrive on March 26 and depart Bangladesh on the next day.