Honored to be a part of the Golden Jubilee Independence celebration of Bangladesh: Rajapaksha 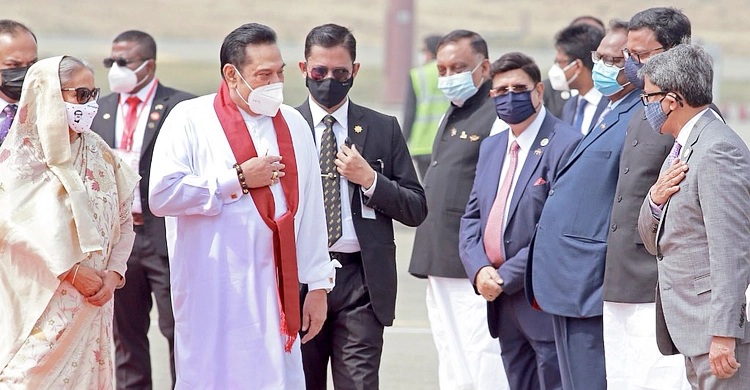 “I look forward to engaging with PM Sheikh Hasina and the Government of Bangladesh to strengthen the bilateral relationship to mutually benefit both [of] our nations,” he tweeted after his arrival in Dhaka.

The Sri Lankan Prime Minister is the second among the world leaders to attend the celebrations of the birth centenary of Father of the Nation Bangabandhu Sheikh Mujibur Rahman and the Golden Jubilee of Bangladesh’s Independence.

“I’m honored to be a part of the Golden Jubilee Independence celebrations and look forward to the next two days of festivities and discussions,” said the Sri Lankan Prime Minister.

In the afternoon, the Sri Lankan Prime Minister will attend the National Parade Square function at Tejgaon as the Guest of Honour.

In the evening, he will attend a cultural programme and banquet to be hosted by the Bangladesh Prime Minister at the Grand Ballroom of Hotel InterContinental.

On Saturday, Rajapaksha will have bilateral talks with his Bangladeshi counterpart at her office and then there would be signing of MoUs on different fields. Both the leaders would witness the signing ceremony.

On Saturday afternoon, he will meet President Md Abdul Hamid at Bangabhaban.

Maldivian President Ibrahim Mohamed Solih was the first who attended the programme on March 17.

The VVIP aircraft of Sri Lankan Airlines, carrying the Sri Lankan Prime Minister along with his wife and other entourage, landed at the airport at 9:45am.

Prime Minister Sheikh Hasina received him at the VVIP tarmac of the airport presenting him with a bouquet.

Mahinda Rajapaksha was given a guard of honour by a smartly turned out contingent drawn from Bangladesh Army, Navy and Air Force at the airport.

Both the Prime Ministers witnessed the state honour staying on the makeshift dais while the national anthem of the respective countries was played. Ministers, State Ministers, civil and military high officials were, among others, present at the airport.

From the airport, the visiting Sri Lankan Prime Minister will move to the National Memorial in Savar to pay tributes to the martyrs of the Liberation War of Bangladesh.

Mahinda Rajapaksha’s visit to Dhaka will be followed by three other heads of state and government of Nepal, Bhutan and India.