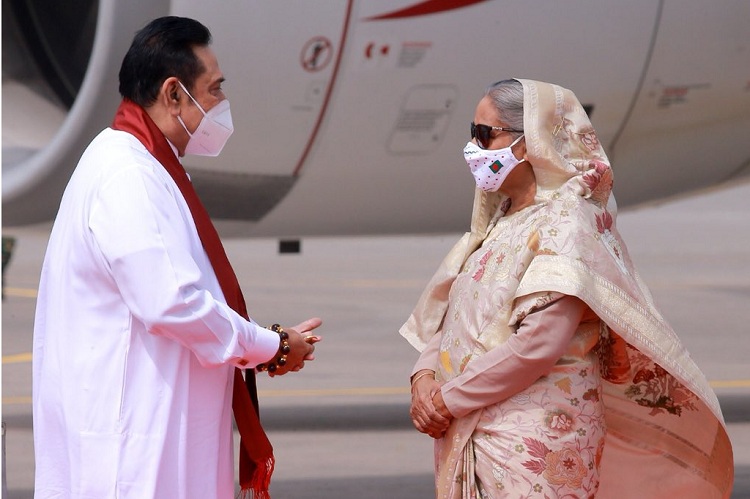 A special flight of the Sri Lankan Airlines carrying Rajapaksa and his entourage members landed at Hazrat Shahjalal (R) International Airport (HISA) at 9:45am.

A guard of honor was given to the Sri Lankan premier by a smartly turned out contingent drawn from Bangladesh Army, Navy and Air Force.

Cabinet secretary, chiefs of the three services, and principal secretary to the Prime Minister’s Office (PMO) were also present.

As part of the programme schedule, the Sri Lankan prime minister will place wreath at the National Martyrs’ Memorial at Savar at 11am, sign the visitor’s book and plant a sapling there.

Foreign Minister Dr AK Abdul Momen will pay a courtesy call on Mahinda Rajapaksa at 3pm at the Presidential Suite at the Hotel Sonargaon.

The Sri Lankan premier will join the function at the National Parade Ground at 4.30pm.

He will attend a cultural programme and banquet hosted by the Bangladesh Prime Minister at Grand Ball Room at Hotel Intercontinental here at 7.30pm.

On Saturday, Mahinda Rajapaksa will pay homage to Bangabandhu by placing a wreath at his portrait on the premises of Bangabandhu Memorial Museum at Dhanmondi road number 32 at 10am. He will visit the museum and sign the visitor’s book there.

Several Memorandums of Understandings (MoUs) will be signed between the two countries in presence of the two heads of the government at 11.40 am.

The Sri Lankan prime minister will pay a courtesy call on Bangladesh President M Abdul Hamid at Credential Hall of the Bangabhaban at 5pm. He will sign the visitor’s book there.

To join the 10-day celebration, Nepalese President Bidya Devi Bhandari will arrive in Dhaka on a two-day tour on March 22 and Bhutanese premier Lotay Tshering is scheduled to be here on March 24 and 25.

Besides, Indian Prime Minister Narendra Modi will arrive here on March 26 and depart Dhaka on March 27.