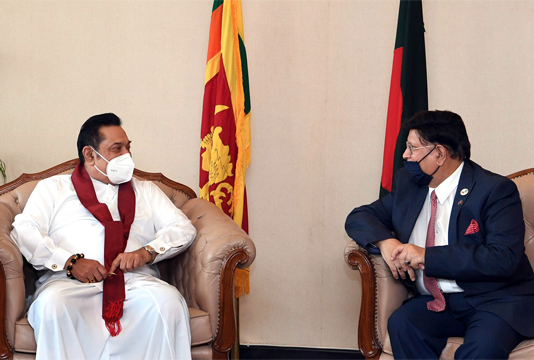 “He (Rajapaksa) said, defiantly they will vote for us in the UNHCR election,” Momen told reporters after calling on Sri Lankan premier in the capital.

Currently, Bangladesh is a member of the UNHCR for the 2019-21 tenure while Dhaka would like to run again for the membership election for the next three-year period, he said.

The Human Rights Council is an inter-governmental body within the United Nations system responsible for strengthening the promotion and protection of human rights around the globe and for addressing situations of human rights violations and make recommendations on them.

During the meeting, Bangladesh foreign minister briefed the Sri Lankan premier about the current situation of Rohingya crisis and sought Colombo’s proactive support in this regard as a friendly nation of Myanmar.

Momen said, he urged Rajapaksa to discuss the Rohingya issue with Myanmar authority.

In reply, he said, the Sri Lankan premier termed the Rohingya crisis as a serious issue and assured that his country would remain beside Bangladesh in resolving the crisis.

The foreign minister also requested the Sri Lankan prime minister regarding implementation of some agreements signed between Bangladesh and Sri Lanka earlier.

Momen expressed his gratitude to Rajapaksa for visiting Bangladesh to join the celebration progrmme amid COVID-19 pandemic.

Several Memorandum of Understandings (MoUs) are likely to be signed between the two countries in presence of the two heads of the governments.