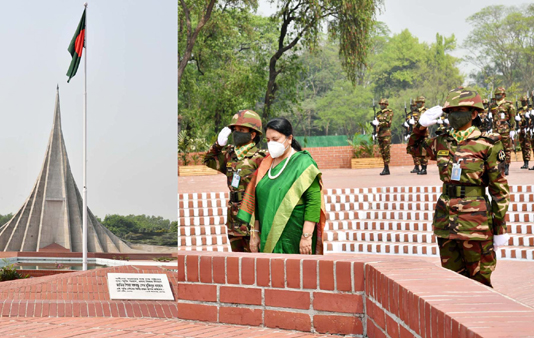 Nepalese President Bidya Devi Bhandari has paid rich tributes to the memory of martyrs’ freedom fighters at National mausoleum in Savar on the outskirts of the capital.

She reached the National Memorial at about 11:10 am and paid homage by placing a wreath at the Memorial.

A smartly turned-out contingent drawn from Bangladesh Army, Navy and Air Force gave her a guard of honour.

“I’m happy to have the opportunity to visit National Martyrs’ Memorial at Savar built in memory of the martyrs who sacrificed their lives for the cause of an independent Bangladesh. I express my heartfelt homage to the martyrs,” she wrote in the visitors’ book.

Bhandari said the martyrs are revered for their selfless contribution to the future of a nation.

“In the course of nation’s history, contributions of martyrs are remembered as the source of strength and inspiration the generations that follow,” she wrote.

The Nepalese President said sacrifices of the martyrs had not only helped create an independent nation of Bangladesh but also has inspired the people of Bangladesh to strengthen the nation’s foundation and developed it rapidly.

“The progress achieved by Bangladesh in socio-economic development today reflects this reality,” she added.

Bhandari said she feels happy to state that Nepal was the seventh country to extend early recognition to Bangladesh as an independent country.

“On behalf of the government and the people of Nepal and on my own behalf, I would like to extend my best wishes to the friendly people of Bangladesh for the achievement of peace, progress and prosperity as envisioned by the martyrs,” she also wrote.

The Nepalese President left the National Memorial for the capital around 11.25am.

Strict security measures were taken at the memorial and it’s adjacent areas ahead of her visit there.

The Nepalese President arrived in Dhaka around 10am on a two-day state visit at the invitation of President of Bangladesh Abdul Hamid.

The Nepalese President became the third among the world leaders to attend the celebrations of the golden jubilee of Bangladesh’s independence and the birth centenary of Father of the Nation Bangabandhu Sheikh Mujibur Rahman.