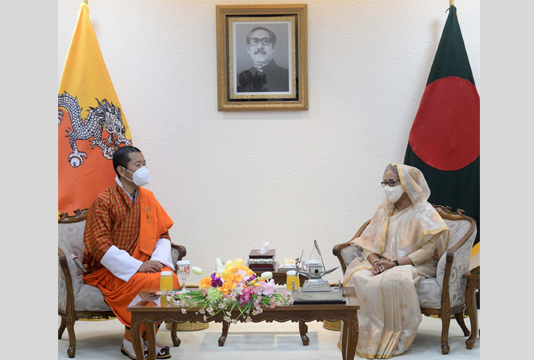 Bangladesh and Bhutan on Wednesday agreed to activate the river routes to expand business between the two countries.

Prime Minister Sheikh Hasina and her Bhutanese counterpart Dr. Lotay Tshering reached the consensus in a meeting held at the Prime Minister’s Office (PMO) in the capital, reports BSS.

Sheikh Hasina asked the authorities concerned to take prompt measures to build necessary infrastructure to maximise the benefit of the preferential trade agreement (PTA) signed between the two countries on December 6 last.

She also asked to build more port of calls where the ships anchor to facilitate trade and commerce.

During the meeting, both the Premier discussed various range of mutual benefits particularly the trade and connectivity.

The leaders also agreed to work in unison at the United Nations (UN) and different international forums.

The Bangladesh Premier asked the authorities concerned to prepare a MoU on setting up a hydropower plant with bilateral and trilateral cooperation involving India.

The Bhutanese Prime Minister requested the Bangladesh Premier to provide full-term visa to his country’s students with multiple entry facilities.

In response, the Bangladesh Premier ordered the concerned authorities to look into the matter.

Sheikh Hasina said that Bangladesh will extend cooperation to Bhutan in the Information Communication Technology (ICT) particularly in broadband internet.

Bhutan Ambassador to Bangladesh Rinchen Kuentsyl and Chief of Protocol Daso Ugyen Gongphel were present among others.

Earlier, the two Prime Ministers held a tête-à-tête that lasted for 45 minutes

The Bhutanese Prime Minister later signed the visitors’ book at the PMO.

Tshering arrived here yesterday morning on a three-day official visit to join the celebrations of the golden jubilee of country’s independence and thebirth centenary of Father of the Nation Bangabandhu Sheikh Mujibur Rahman.