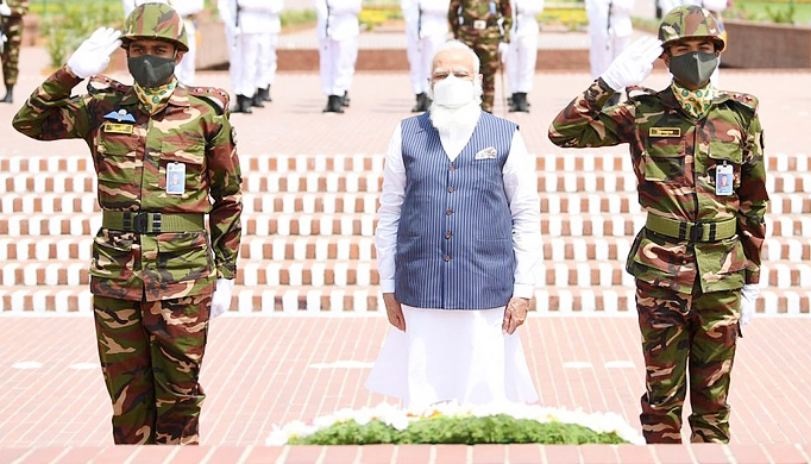 After arriving in Dhaka on Friday morning, Indian Prime Minister Narendra Modi went straight to the National Martyrs’ Memorial in Savar from the airport to pay rich tributes to the memory of martyrs’ freedom fighters.

He paid homage by placing a wreath at the Memorial and observed one- minute silence to pay homage to the martyrs of the Liberation War of Bangladesh.

A special aircraft of the Air India carrying the Indian Premier along with his entourage members landed at the Hazrat Shahjalal International Airport at 10.30 where his counterpart Prime Minister Sheikh Hasina welcomed him.

Narendra Modi came to Dhaka to attend the celebration programmes of the Father of the Nation Bangabandhu Sheikh Mujibur Rahman’s birth centenary and the golden jubilee of Bangladesh’s independence.

The Indian Premier became the fifth among the world leaders to attend the 10-day celebration. This is the first foreign visit of Modi since the COVID-19 onset.

He will visit the Bangabandhu Memorial Museum at Dhanmondi 32 to pay homage to Father of the Nation Bangabandhu Sheikh Mujibur Rahman.