Modi thanks PM Hasina for special welcome at airport 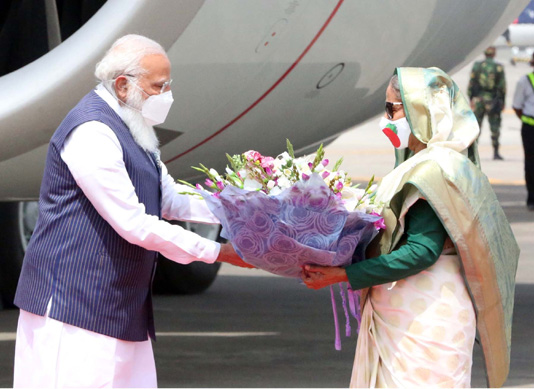 After few hours of landing in Bangladesh, Indian Prime Minister Narendra Modi tweeted in Bangla thanking Prime Minister Sheikh Hasina for according him a special welcome at the airport.

“Landed in Dhaka. I thank PM Sheikh Hasina for the special welcome at the airport,” he tweeted both in Bangla and English after arriving here for a two-day state visit, reports BSS.

The Indian premier said that this visit would contribute to even stronger bilateral relations between the two neighboring nations.

Earlier yesterday, Modi tweeted, “As I leave for Bangladesh tomorrow, I look forward to remembering the life and ideals of Bangabandhu Sheikh Mujibur Rahman, and celebrate 50 years of Bangladesh’s War of Liberation, as well as our diplomatic ties.”

In a sperate tweet on Thursday, the Indian premier said New Delhi’s partnership with Dhaka is an important pillar of India’s Neighbourhood First policy, and “we are committed to further deepen and diversify it”.

Indian Prime Minister Modi was accorded a rousing reception as he arrived here this morning on a two-day state visit to join mainly celebrations of the golden jubilee of Bangladesh’s independence and the birth centenary of Father of the Nation Bangabandhu Sheikh Mujibur Rahman.

On his arrival at the airport, Bangladesh Prime Minister Sheikh Hasina received her Indian counterpart.

A 19-gun salute heralded the arrival of Narendra Modi while a red carpet was rolled out at the airport to welcome him.

The Indian Premier became the fifth among the world leaders to attend the 10-day celebration.

This is the first foreign visit of Narendra Modi since the Covid-19 onset.