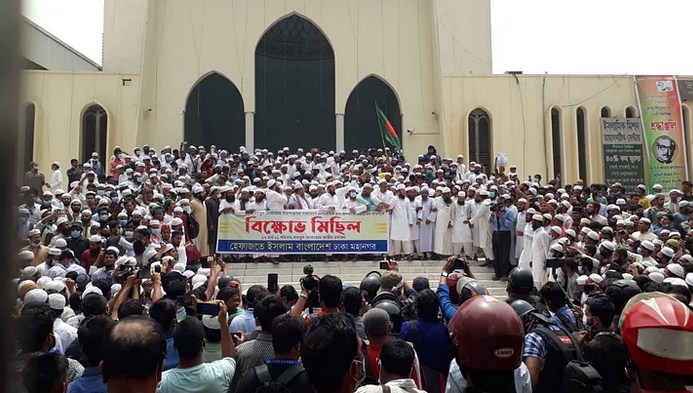 Leaders and activists of Hefazat-e-Islam Bangladesh have staged demonstration in the Baitul Mukarram area of the capital protesting the killing of four madrasa students during clashes with police.

They staged the protest at the north gate of Baitul Mukarram 12 noon Saturday. At that time, they chanted slogans against the Indian Prime Minister Narendra Modi.

A large number of law enforcers were deployed in Paltan area including Baitul Mukarram centering the protest.

Hefazat-e-Islam central joint secretary general Fazlul Karim Qasemi said, “Mod’s visit was marred by the blood of “martyrs”. The movement for the fall of the government will start if the hartal faces obstruction.”

The organisation joint secretary general Maulana Mamunul Haque in his speech said, “Panic has been created after entering into the mosque. Helmet forces have created panic with showdown.”