Modi’s homage to Bangabandhu: Here’s what he wrote on visitors’ book 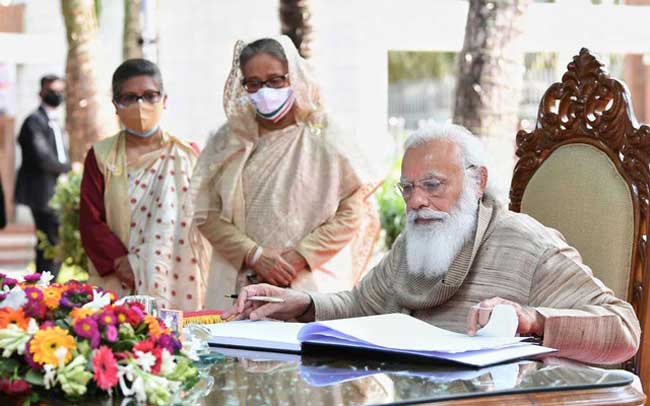 Indian Prime Minister Narendra Modi has paid tribute to Bangabandhu Sheikh Mujibur Rahman at his final resting place in Tungipara on the second day of his Bangladesh visit.

Modi was greeted with flowers by his Bangladesh counterpart Sheikh Hasina, accompanied by her younger sister Sheikh Rehana on Saturday. Modi laid a wreath at the tomb of the architect of an independent Bangladesh, reports bdnews24.com.

Here’s what the Indian prime minister wrote in the visitors’ book in Tungipara in his homage to Bangabandhu:

“The life of Bangabandhu epitomized the freedom struggle of the people of Bangladesh for their rights, for the preservation of their inclusive culture and identity.

“His indomitable spirit and fortitude inspired millions, who emerged victorious despite challenging circumstances. On behalf of the people of India who revere Bangabandhu as a hero, I pay humble homage to this great statesman of the 20th century.

“Bangabandhu is etched in the collective memory of the subcontinent, whose history he reshaped through the sheer force of his commitment and sacrifice. In this historic Mujib Borsho, I am confident that his eternal message of equality, freedom, justice and inclusion will continue to guide our thoughts and actions.”