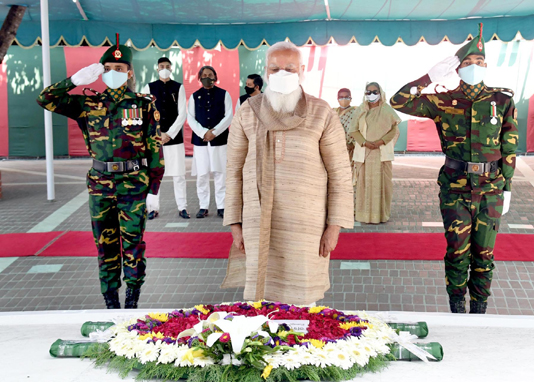 Prime Minister Sheikh Hasina received the Indian Premier in Tungipara at 11:30am. And after that, Modi paid tribute to Bangabandhu by placing wreath.

After laying the wreath, Narendra Modi stood in solemn silence for some time as a mark of profound respect to the memory of Bangabandhu, the architect of Bangladesh’s independence.

A special munajat, seeking eternal peace of Bangabandhu and other martyrs of the August 15 carnage and martyrs of the Liberation War, was also offered.

Sheikh Hasina along with her sister Sheikh Rehana showed the Indian Prime Minister various parts of the mausoleum.

Modi also planted a sapling there.

Tight security have been beefed up in Tungipara area centreing Modi’s visit.

Modi is scheduled to visit Harichandra Thakurbari Temple in Orakandi of Kashiani in Gopalganj. He will offer prayers and interact with the Matua Community leaders before flying back to Dhaka.

Earlier this morning, the Indian Premier offered prayers at the centuries-old Jeshoreshwari Kali temple at Shyamnagar upazila in Satkhira district.

Wearing mask, Modi offered prayers inside the temple and sat on the floor while the priest was reciting the religious texts.