Kerry arrives to hand over Biden’s invitation to PM 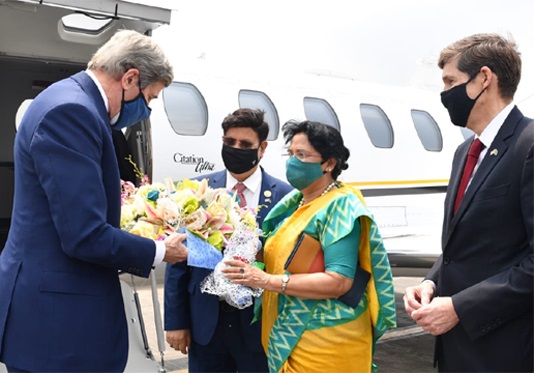 The United States (US) Special Presidential Envoy for Climate John Kerry arrived here to hand over the US President Joe Biden’s invitation to Prime Minister Sheikh Hasina for attending a climate summit.

Foreign Minister Dr AK Abdul Momen received Kerry at Hazrat Shahjalal International Airport in city as the special envoy arrived here at 11:30 am after wrapping up his India tour.

US Ambassador to Bangladesh Earl R Miller was present at the airport.

During the visit, Kerry will hand over the US President’s invitation to Bangladesh Premier in person to attend the “Leaders Summit on Climate” to be held on April 22 and 23 virtually, a foreign ministry official said here.

After the meeting, Kerry and Dr Momen will hold a joint press briefing at the state Guest House Padma.

As the president of the Climate Vulnerable Forum and the Vulnerable Twenty Group of Finance Ministers, Bangladesh plays a leading role in combating climate change.

US President Joe Biden has invited 40 world leaders, including Prime Minister Sheikh Hasina, to the “Leaders’ Summit on Climate” that he will host virtually.

The “Leaders Summit on Climate” will underscore the urgency – and the economic benefits – of stronger climate action.

It will be a key milestone on the road to the United Nations Climate Change Conference (COP26) this November in Glasgow.

President Biden took action on his first day in office to return the US to the Paris Agreement.