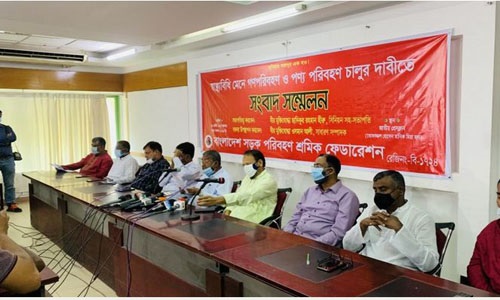 Transport workers have called a Country-wide protest for May 2 demanding the government to reopen the public transport services following health guidelines.

Bangladesh Road Transport Workers Federation came up with the announcement at a press conference at Jatiya Press Club in the capital on Friday.

The federation announced to bring out processions across the country on Sunday and hold a sit-in at the deputy commissioners’ offices.

bdnews24.com adds: The transport ban has left at least 50 percent of the workers unemployed, while the government kept shops and malls open in the pandemic lockdown, according to Bangladesh Road Transport Workers Federation.

They urged the government to allow the public transports to run with half of their seats vacant, a requirement under the health protocols.

Up to 75 percent of passengers travel by road, while 65 percent of goods are transported by road in Bangladesh. At least five million transport workers are engaged daily in carrying passengers and goods, Osman Ali, secretary of the group, said in a news briefing on Friday.

“As the transport workers work in close proximity to the public, they face the highest risk to contract the coronavirus. It’s risky for the passengers as well. Under the circumstances, it is logical to ban the public transport; but at the same time ensuring the livelihoods of the transport workers should be considered too,” he said. “They need to make a living to survive.”

“We’re not against the lockdown. It was decided that offices, courts, educational institutions and everything else would be closed. Transport workers never objected to the banning of public transports. But as the lockdown has been relaxed, garment factories, shopping malls and kitchen markets are open.”

As the public transport system is shut, passengers are travelling by rickshaw, auto-rickshaw, car, microbus, mini-truck and motorcycle, Osman said.

They are also using speed boats and engine-run boats paying an extra fare. It is increasing the risk of spreading the virus and creating scope for extra expenses and harassment to the passengers. All other vehicles are running on the roads, while only the buses and trucks are banned. This has agitated the road transport workers who are deprived of their livelihoods, he said.

“Five million transport workers are living a life less than human. We are seeking financial assistance from the government for the transport sector,” Osman said.

>> Public transports should be allowed to carry goods and passengers to 50 percent of their capacity under the health protocols.

>> Road transport workers should be provided with financial assistance and food aid.

>> The government should provide rice at Tk 10 per kg through an open market sale for transport workers.