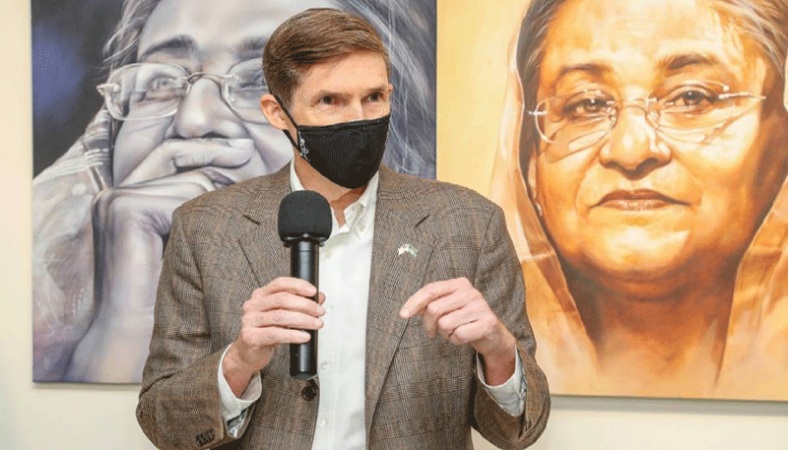 The United States has said it is actively considering the request made by the Bangladesh government over the supply of Covid-19 vaccine doses to meet Bangladesh’s immediate needs.

Bangladesh will get a reply of the letter, sent to US Secretary of State Antony Blinken by Foreign Minister Dr AK Abdul Momen, within the next couple of days, reports UNB.

“Two things he (Ambassador Miller) said. It’s (the request for vaccine doses) under active consideration and the Ambassador expects Bangladesh will get a reply as early as possible — within a day or two,” said State Minister for Foreign Affairs M Shahriar Alam after his meeting with US Ambassador to Bangladesh Earl Miller.

While talking to a small group of journalists, including the UNB correspondent, at his office, the State Minister said they will be waiting to know the content of the reply.

Meanwhile, he said, US companies are in touch with the Health Ministry as they have a long-term plan of producing vaccines in Bangladesh.

The Ambassador informed that the US government is exploring the possibilities to produce US vaccines in Bangladeshi pharmaceutical companies.

The State Minister and the US Ambassador also discussed the ongoing cooperation between two countries in combating Covid-19 pandemic apart from the issue of providing vaccines for meeting Bangladesh’s immediate needs.

The US Ambassador informed that his government is working on this, and he has recommended having a regional approach in South Asia in distributing vaccines from the US.

The US will share up to 60 million doses of its Oxford-AstraZeneca Covid-19 vaccine with other countries as they become available.

The Foreign Minister had a meeting with US Ambassador to Bangladesh Earl Miller at his office on Thursday.

The Foreign Minister said the US government needs permission from the Food and Drug Administration to export vaccines which is a time-consuming process. “But we need it immediately.”

Bangladesh has received 7 million of Oxford-AstraZeneca covid-19 vaccine doses produced by Serum Institute of India (SII) through its contract. Bangladesh also received 3.3 million doses of vaccine as a bilateral partnership gift. This is the largest amount sent from India to any country.

The State Minister for Foreign Affairs urged for providing timely visa interview slots for Bangladeshi students intending to go to the US for studies, observing that a large number of students are facing difficulties.

The US Ambassador assured that they are working on resolving the backlog created by the lockdown situation.

The State Minister also observed that the recently published report by the US government on religious freedom in Bangladesh did not well reflect the ground scenario, as the government is making its best efforts to ensure communal harmony and non-discrimination in the country.

Recalling that the present government has introduced the Vested Property Return (Amendment) Act in 2011 under a difficult situation, he emphasised the government’s sincerity to resolve the issue.

Shahriar also underscored that the Chittagong Hill Tracts Peace Treaty in 1997 was also signed by Prime Minister Sheikh Hasina’s government, and the implementation of the Treaty is being held gradually.

He opined that the examples in the Report are discrete incidents and action has been taken by the government against the perpetrators.