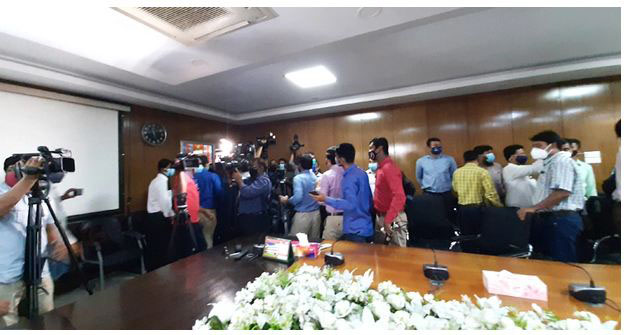 The briefing was scheduled to held around 11am.

“Yesterday, we (journalists) waited in front of the health secretary’s room for a long time to talk to him and to know about the matter. But, he did not meet us, he repeatedly insulted us. We’re boycotting today’s briefing. BSRF leaders will take decision about the next course of action after an emergency meeting,” Shamim Ahmed said requesting all to leave the conference room.

Then the journalists came out of the conference room.

Earlier, a press release, signed by the BSRF general secretary, urged the journalists to boycott the programme.

The release said the decision was taken to protest the harassment and arrest of BSRF member Rozina Islam.

Rozina Islam was detained on Monday night on charge of “stealing” government documents and taking photographs of them on her mobile phone without due permission.

Hours after detention, Rozina was handed over to Shahbagh Police Station around 8:30 pm.

Deputy Secretary of Health Services Shibbir Ahmed then filed a case against her under the Official Secrets Act.