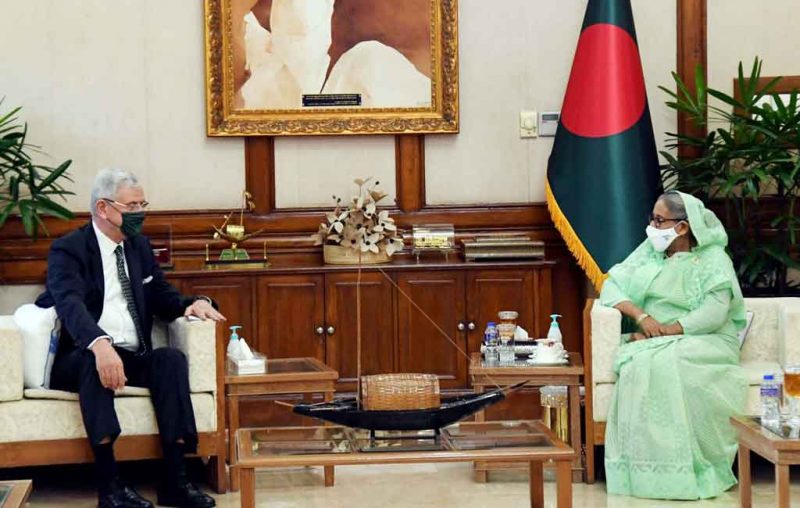 Prime Minister Sheikh Hasina on Tuesday expressed concern about the repatriation of Rohigyas following the recent development in Myanmar as it has made the process uncertain.

“The situation has become uncertain due to the recent developments in Myanmar,” Sheikh Hasina said when visiting UNGA President Volkan Bozkir met her at her official residence Ganobhaban, reports UNB.

Mentioning that over one million Rohingya people have taken shelter in Bangladesh, the Prime Minister said, “We were in dialogue with the Myanmar government with little progress.”

She said Bangladesh is monitoring the present situation in Myanmar as the repatriation process has become uncertain.

Hasina said Bangladesh has prepared an island, Bhashan Char, for temporary but comfortable shelter of the Myanmar nationals, mentioning that over one lakh Rohingyas can be shifted there. “More than 18,000 have already been shifted.”

About the pandemic in Bangladesh, the Prime Minister said the government is trying to save both the lives of people and the economy amid the virus surge.

Hasina mentioned about the stimulus packages and other incentives announced for all sections of people to keep the economy moving properly facing the fallouts of the pandemic.

Regarding women empowerment, Hasina said the process to empower women was initiated by Father of the Nation Bangabandhu Sheikh Mujibur Rahman just after Bangladesh’s independence.

“We’re just following his path to empower women in all sectors of society – from politics to administration,” she said.

Bozkir said they are thinking about holding the General Assembly this year with the physical presence of heads of governments. “We’re thinking of allowing a delegation of one-plus persons from each country in this year’s UNGA,” he said.

He highly appreciated the leadership of Prime Minister Sheikh Hasina for the remarkable progress in gender parity and women empowerment in Bangladesh. “Bangladesh has achieved tremendous success led by a lady prime minister.”

About Bangladesh’s graduation from the LDC status, Bozkir said Bangladesh has become an example before the whole world. “The people of Bangladesh are very courageous, and they’ll carry it forward,” he said.

Turning to the Rohingya issue, the UNGA President highly praised the generosity of Bangladesh for giving shelter to over one million Rohingyas.

PM’s daughter Saima Wazed, who is also the Chairperson of the Bangladesh National Advisory Committee for Autism and Neurodevelopmental Disorders, and Ambassador-at-Large Mohammad Ziauddin were present during the meeting.