Legal action if anyone tries to visit Israel from Bangladesh: Momen 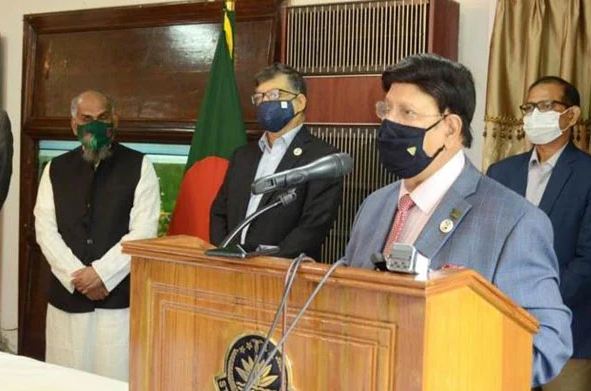 Foreign Minister Dr AK Abdul Momen on Wednesday warned of action as per the immigration law if anyone tries to go to Israel from Bangladesh as it still does not recognise Israel.

“We remain very strong (on legal ground). Everybody knows it. Our immigration will stop them immediately. Immigration will control those things and they do. They’ve been doing it for years,” he told reporters, adding that it is the Home Ministry that ensures the enforcement of the law, reports UNB.

The Foreign Minister made the remarks while responding to questions from reporters after the handover of donation of pharmaceutical products for the people of Palestine to its Ambassador to Bangladesh Yousef SY Ramadan at state guesthouse Padma.Foreign Secretary Masud Bin Momen was also present.

Dr Momen said Bangladesh has not changed its position towards Israel at all, and no one from Bangladesh can visit Israel.

“If anyone goes there, the person will be liable to be prosecuted. There has been evidence before,” said the Foreign Minister, adding that the government never gave permission to anybody to visit Israel.

He said there is confusion as they have created a new e-passport six to seven months ago deleting “except Israel” to maintain its standard. “Passport is an identity and it doesn’t relate anything with the foreign policy.”

The Foreign Minister said the foreign policy of Bangladesh remains the same as it was during Bangabandhu’s time. “We don’t recognise Israel.”

On Tuesday, Dr Momen expressed displeasure over the comments made by Palestinian Ambassador to Bangladesh Yousef SY Ramadan terming those comments totally irrelevant.

“This is irrelevant to me, totally irrelevant,” he told reporters, venting anger when his comment was sought on Palestine Ambassador’s comment regarding removal of words – “except Israel” from Bangladesh e-passports.

Dr Momen said Bangladesh maintains its foreign policy by its own way and it is totally irrelevant which Ambassador says what.

The Foreign Minister said there will be more donations as Bangladesh handed over medicine worth Tk 40 on Wednesday.

“It (more donations) has been approved. We’ll send that soon. There’ll be plenty from us as Palestine is our old friend,” Dr Momen said.

The Palestinian Ambassador thanked the government of Bangladesh for expressing solidarity and support. “People in Palestine appreciate your help, support and donation very much.”

While talking to a small group of journalists at the Embassy on Monday, the Palestinian Ambassador appreciated the generosity of Bangladeshis, including expatriates Bangladeshis in Malaysia, Saudi Arabia, the United Arab Emirates, Oman, Qatar and Bahrain.

“You’ve such an amazing principle. We don’t compare you with anyone. I’m saying that from my heart. It’s not lip service. It’s true. You’re magnificent people. We’ll never forget your support, solidarity and principled attitude,” he said.