Our peacekeepers are our ambassadors of peace: Momen 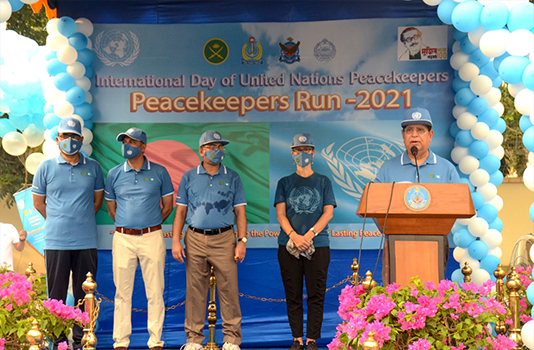 Foreign Minister Dr AK Abdul Momen today said the country’s UN peacekeepers have been branding Bangladesh globally as a peace-loving nation while they created a respected position for Dhaka in the international forums.

“Our peacekeepers are our ambassadors of peace and branding Bangladesh abroad as a peace-loving nation and contributing to building a peaceful global order,” he said.

The foreign minister made the remarks while inaugurating the Peacekeepers Day Rally to commemorate the ‘International Day of United Nations Peacekeepers’-2021 in the capital.

Dr Momen said the whole world lauds Bangladesh for its leading role in the maintenance of international peace and security and our professionalism.

“Our contribution to the world peace helps us keep our head high in the international forum,” he said.

He said Prime Minister Sheikh Hasina’s government has been pursuing a dynamic foreign policy based on the principle of “Friendship to all, malice towards none”, as enunciated by Father of the Nation Bangabandhu Sheikh Mujibur Rahman.

Imbued with this value, Momen said, Bangladesh has consistently contributed to all ways possible to international peace and security.

“What could be a better way to fulfill the dream of our Father of the Nation for a peaceful world who so ardently declared in his maiden speech at the United Nations General Assembly way back in 1974,” he said.

Momen said Bangladesh’s constitutional obligations mandate it to seek peace and remain at the forefront of the UN Peacekeeping operations in various conflict zones.

“Our participation in the peacekeeping operations and devoted service and sacrifices of our peacekeepers make us proud as a nation,” he observed.

He recalled the contribution of all the peacekeepers who are serving round the clock to protect many of the world’s most vulnerable people with dedication, distinction, and courage.

“On this day, we especially salute those peacekeepers who made their supreme sacrifice,” the foreign minister said.

He noted that Bangladesh is currently the top contributors of military and police to UN Peacekeeping with almost six and a half thousand peacekeepers deployed in 8 countries at present.

“Even during this global Pandemic, our peacekeepers continue to serve in various peacekeeping missions, fearlessly rendering their responsibilities,” he said.

The foreign minister hoped that the peacekeepers’ dedicated-endeavors would help achieve sustainable peace for the international community.