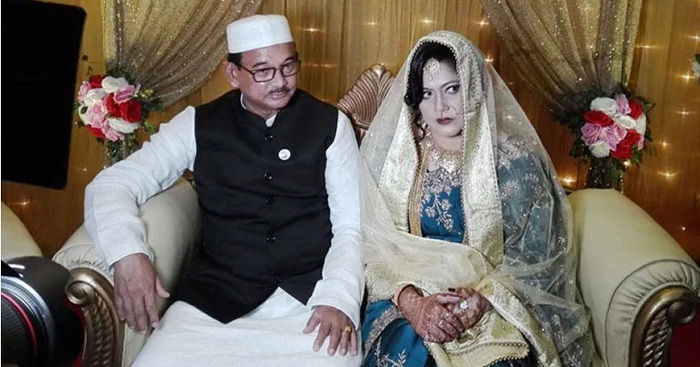 The 65-year-old Nurul Islam Sujan married the 42-year-old Moni two and a half years after his first wife’s death.

Late Abdur Rahim was a lineman at Bangladesh Power Development Board (PDB). He settled at Birampur with his wife and children. He also built a house at Natun Bazar area in Birampur.

He said her sister got married at a low profile wedding ceremony. She lives at Uttara and worked at administration of Cambrian School and College there. She has already passed law and started practicing with a senior lawyer at High Court.

Milon Hossain said, “My sister is now at her Uttara residence. She will go to her husband Railways Minister Sujon’s residence in December. When the Prime Minister accorded him permission to get married on Thursday last, she said,”Look, I intended to be present at your wedding ceremony, but could not be present due to coronavirus. You get married. I will greet your wife later on.”

Because of it, the Railways Minister will take the bride to his house through a party in December next. “However, the minister is now staying at my sister’s Uttara residence. He is also staying at the residence today,” he said.

He further said her sister got married in Kushtia earlier, but got divorced due to conjugal problems. She has a daughter from her previous marriage. Since then she has been living in Dhaka along with her daughter. She used to visit Birampur on the occasions of Eid and other functions.