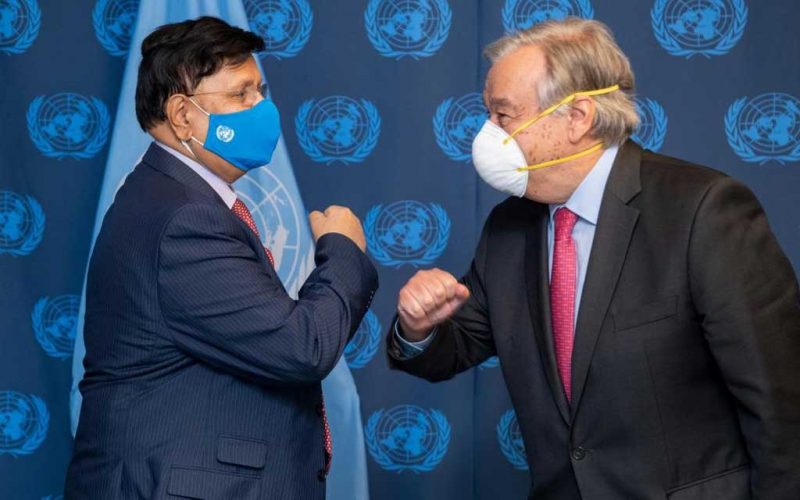 Foreign Minister Dr AK Abdul Momen has sought UN Secretary General Antonio Guterres’ personal intervention over the Rohingya issue, saying it is now needed more than ever as the political situation in Myanmar has deteriorated.

The Foreign Minister also said it is frustrating that many influential countries have enhanced their economic and business relations with Myanmar while publicly decrying the human rights violations there.

Dr Momen made the remarks during his meeting with UN Secretary General Antonio Guterres at the UN Headquarters on Thursday, reports UNB.

Referring to the humanitarian gesture of Prime Minister Sheikh Hasina in providing shelter to the Rohingya, the Secretary General thanked Bangladesh for hosting the displaced Rohingya minorities from Myanmar.

“The world won’t forget Bangladesh’s generosity in hosting the largest refugee camps of the world,” the Secretary General added.

The Foreign Minister also briefed the SG about the facilities in Bhashan Char and stressed the importance of UN’s operations there.

Dr Momen thanked the Secretary General for declaring the Covid-19 vaccine a public good and requested for UN’s initiatives to ensure that the vaccine becomes accessible to all.

The Secretary General in response informed about his efforts during the recent G-7 summit where he particularly mentioned Bangladesh’s capacity to produce vaccines.

“The UN has a special relation with Bangladesh,” said the Secretary General.

He praised Bangladesh’s strong leadership role in all areas of the UN’s activities, especially in peacekeeping, climate change and women empowerment.

The Foreign Minister also thanked him for his continued attention to the Rohingya issue.

Although Bangladesh is on track towards SDG implementation, there are concerns about the impacts of Covid-19 pandemic, especially in securing financing for the SDGs, he said.

He requested the Foreign Minister for Bangladesh’s enhanced representation in the United Nations, particularly at senior management level.

Later, the Foreign Minister held a meeting with Rosemary DiCarlo, Under Secretary General for the Department for Peacebuilding and Political Affairs.

During the meeting, they discussed the current political situation in Myanmar and its impacts on the repatriation of the Rohingya Muslims from Bangladesh to Myanmar.

Ambassador Rabab Fatima accompanied the Foreign Minister at both the meetings.