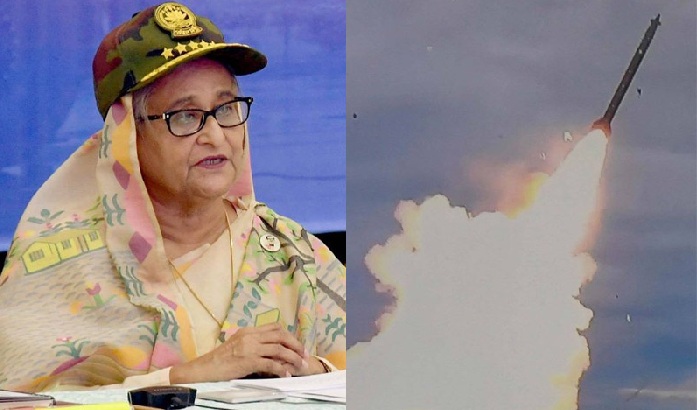 Prime Minister Sheikh Hasina on Sunday urged each member of Bangladesh Army to concentrate on attaining the highest professional skills and excellence keeping pace with the changed world security system.

“I believe Bangladesh Army, in continuity with the past, will remain ever ready to tackle any disaster alongside protecting the country’s sovereignty,” she said.

Mentioning that this Tiger MLRS at a time could strike accurately and effectively multiple targets in long distance taking less time than other artillery systems, she hoped it would bring new dimension to strengthen Bangladesh Army’s existing operational efficiency.

“I believe this modern system (MLRS) would strengthen Bangladesh Army as well as increase mental strength and confidence of army personnel,” she noted.

An audio-visual on Tiger MLRS was also presented.

On the occasion of the Birth Centenary of Father of the Nation Bangabandhu Sheikh Mujibur Rahman and Golden Jubilee of the country’s independence, the Tiger MLRS was inducted in the army.

The Prime Minister told the army personnel that this day became a memorable one towards the steps of modernizing the country’s Armed Forces.

She said members of the Armed Forces have been making the highest sacrifice during any necessity of the country, especially now they are working as front liners in tackling the ongoing global pandemic- Covid-19.

Sheikh Hasina reiterated her call to the countrymen to follow the health safety protocols to keep themselves away from the attack of coronavirus.

She said the Covid-19 outbreak has halted the world’s economy, but the government is trying to keep the country’s economy rolling.

Mentioning that Bangladesh is moving ahead and is now more advanced economically, the premier said the country has attained capability of keeping pace with many countries economically across the globe.

“We want Bangladesh will be a developed country, freed from hunger and poverty and each family live in good situation,” he added.

She said the Awami League (AL) government has been pulling the country ahead economically as it is staying in state power for a long time.

She continued that the government also incorporated armoured personnel carriers (APC), AVC, battle tanks, helicopters and other equipment to the army.

She said after assuming power in 2009 they formulated “Forces Goal-2030” in line with the “defense policy” framed by Bangabandhu Sheikh Mujibur Rahman in 1974 and has been implementing it.

In addition, the AL government in 2016 established Bangladesh Peacebuilding Centre (BPC), she added.