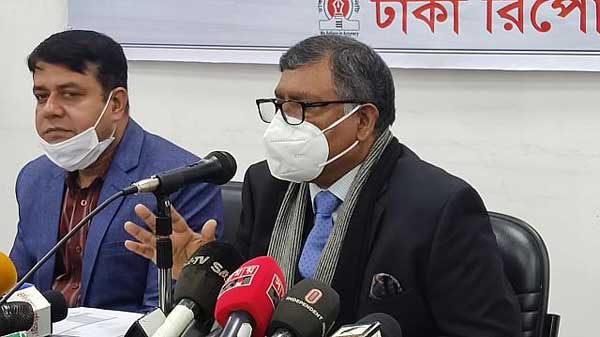 Several lawmakers on Saturday demanded the resignation of Health Minister Zahid Maleque, alleging various irregularities in the health sector, deaths of people in different hospitals due to oxygen crisis, and extreme mismanagement of Coronavirus treatment.

Opposition Jatiya Party and BNP lawmakers demanded the resignation of the Health Minister Zahid Malek in the parliament while speaking on the point of order.

BNP MP Golam Mohammad Siraj in his speech said, “Bogura is now a hotspot of coronavirus. In the last three days, 24 people have died there. There is a high flow nasal cannula crisis. Health Minister is not present in the parliament. Coronavirus patients are crammed in three Covid dedicated hospitals in the district town.”

Rustom Ali Faraji of Jatiya Party slammed the Health Minister, saying, “I talked about buying surgical mask in Parliament that day. We hoped that the minister would look after on it and investigate the matter. But he avoided the matter, saying it was not true. That is why today I have brought information and evidence.”

“The parliamentary committee has discussed the matter and ACC will look into it. The matter also published in various media. He (Health Minitser) should have investigated without ignoring the truth. So my demand is to investigate this matter,” he added.
Rustom Ali MP said, “Coronavirus has spread in a massive way. We have to take immediate action in this regard. It must be prevented by deploying Army everywhere. Adequate treatment needs to be provided.”

Jatiya Party MP Kazi Firoz Rashid said, “When asked, the health minister said, “I am giving everything.” But there is nothing anywhere. Thus we have wasted a year. If our MPs were given the responsibility, if we gave money, we could fix everything. But it is not our responsibility. Those in charge leave two days later. They don’t have accountability.”

He further said, “There are ICU beds but no trained doctors-nurses. There is no oxygen system. Most patients are dying from lack of oxygen. There are committees to investigate various incidents. But the report of any inquiry committee has not come before us till date. Is there no value in human life? Corona is all over the world now. Is it possible to accept such irregularity in treatment?”
Firoz Rashid said, “In Satkhira, seven Covid patients died in an hour due to lack of oxygen. Former health minister AFM Ruhal Haque’s house is there. The hospital there should have been of five star standard. The minister went, the minister came. But you can’t keep your own area in a good position.”

Jatiya Party MP Mujibul Haque Chunnu said, “The Health Minister has compared our health system with the United States. He said he has done a lot in one year. Today news has published that 37 districts of Bangladesh do not have oxygen system. If five patients get oxygen in the hospital, 20 people stay in line. Patients are dying due to oxygen. There is so much writing in the newspapers, did the health minister go to a hospital and see these. What does he do? He does zoom meeting.”

The former state minister said, “England’s health secretary has had to resign over a kiss. What type of people is our health minister! I don’t understand. He has nothing to be ashamed of. No character. He should resign.”

BNP MP Harunur Rashid said “Coronavirus has to be controlled at all costs. As the rate of infection increases, it will become alarming in the next 10-15 days.”

“The law and order situation violates due to hunger and poverty. The Army has been deployed. Eid-ul-Azha is in front. For this I am demanding emergency delivery of food for the poor people. Specific policies need to be formulated soon for the transportation and sale of sacrificial animals. Otherwise, it will also create a crisis.”