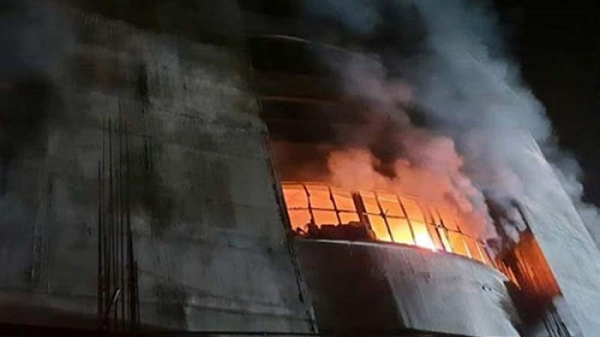 As many as 49 bodies were recovered so far, after a devastating fire at Rupganj Sejan Juice Factory here as the firefighters started recovering bodies from the debris though the blaze is yet to come under control fully.

“The fire service personnel recovered 49 bodies so far from the place of occurance . . . The rescue campaign led by Fire Service and Civil Defense still continues to control the fire on the fifth and sixth floors of the factory,” Narayanganj Deputy Commissioner (DC) Md Mostain Billah told BSS this afternoon.

Earlier, Narayanganj district deputy director of the Fire Service and Civil Defense Abdul Al Arifin told BSS that the devastating fire originated at 5:30 pm yesterday from the second floor of the seven-storey building located in Kornogop area of Bhulta under Rupganj upazila.

He said three people, including two female workers, died when they jumped off the roof after being burnt in the blaze yesterday.

Police said at least 50 people mostly the factory workers and employees received injuries in the fire that broke out at the factory of Hashem Foods Ltd, a sister concern of Sajeeb Group.

The injured were undergoing treatment at various hospitals, including Dhaka Medical College and Hospital (DMCH) while the bodies were sent to DMCH morgue.

Deputy Director of the Fire Service Saleh Uddin Chowdhury earlier said that it might take a long time to bring the fire under control due to the presence of chemicals and flammable substances.

The blaze was brought under control around 12:30 pm today, the fire service’s central control room confirmed.

However, smoke is still coming out from several floors of the building till filing of the report this afternoon. Firefighters are working to put out the blaze.

The committee has been asked to submit its probe report within seven days.