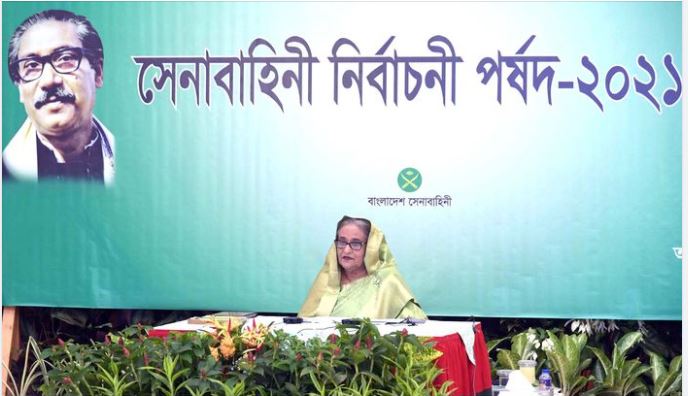 “That is why it’s (army) leadership must be entrusted to professional and responsible officers who are always imbued with the ideology of the great War of Liberation and ready to sacrifice their highest for the protection of sovereignty,” she said, reports BSS.

Mentioning that discipline is the backbone of the army, she laid emphasis on finding honest, disinterested, fair, people-friendly, humane and successful officers who demonstrated leadership in various fields of their career for the case of promotion.

Sheikh Hasina said she was happy to know that the promotion of army officers is being given following TRACE (Tabulated Record and Comparative Evaluation) method which reveals a comparative assessment of various aspects of their professionalism.

“At the same time, I believe the adjudicators by standing above their personal likes and dislikes would select the right person for promotion through wisdom and prudent analysis,” she said, adding, “You (adjudicators) just have to be neutral and influence-free to find out the capable leadership.”

The Prime Minister said appropriate officers should be promoted to various important posts such as command, staff, trainer, and it will increase the acceptance of all.

She said the Awami League government always runs the country as the servant of the people, never as a ruler.

Sheikh Hasina said Bangladesh Army had started its progress due to the sincere efforts of Father of the Nation Bangabandhu Sheikh Mujibur Rahman. In the continuation of the progress journey, the army has now become a highly professional, efficient and modern force due to intensive care from her government, she said.

“Our army has been working very efficiently in various development and public welfare activities, including containing the recent coronavirus pandemic, which is really commendable. Not only at home, the army has brought a rare honor and dignity for the country from the world stage,” she said.