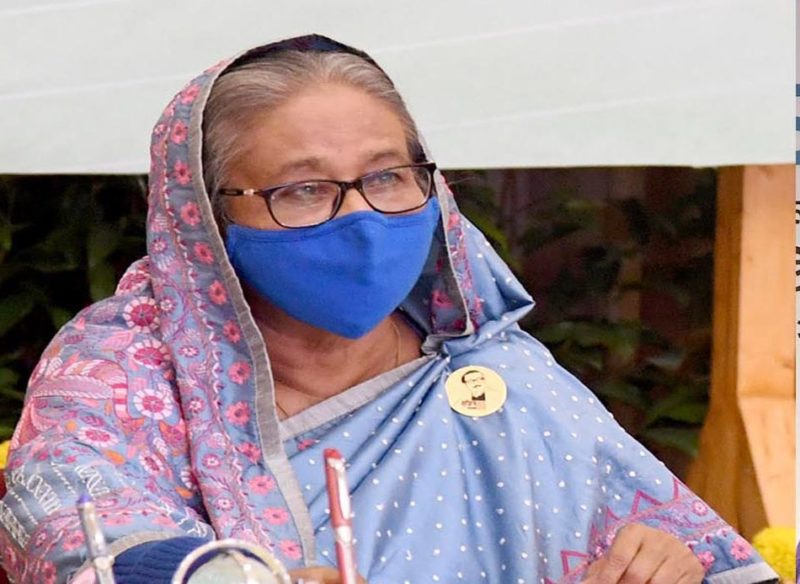 Prime Minister Sheikh Hasina on Sunday asked the government officials to make sure that all, particularly the home-goers, wear masks and follow other health guidelines, alongside continuing their efforts to change people’s fate despite the fact that coronavirus has been rattling the world.

“We have nothing to do alone as it (Coronavirus) is a global problem. Despite the fact, we’re trying to check its spread and give protection to the people. We have to work for the people by keeping the wheels of the socio-economic advancement running alongside making sure that the efforts to change the fate of the people won’t stop anyhow,” she said, reports UNB.

The Prime Minister said this while addressing virtually a function on the occasion of signing the Annual Performance Agreement (APA) of various ministries and departments for the FY 2021-2022 and distributing the APA performance and integrity awards, from her official Ganabhaban residence, in Dhaka.

The Cabinet Division organized the function at the Osmani Memorial Auditorium in the capital.

The Prime Minister reiterated her call to the people to maintain the health protocols to check further spread of the lethal virus.

“I know, people like to go to their village homes (to celebrate the Eid-ul-Azha with their near and dear ones),” she said and asked the government officials to make sure that people, particularly the home-goers, use masks by making them aware about the virus.

The Prime Minister said that her government has taken required measures so that none remains out of the inoculation.

“We have started (mass) vaccination. More vaccines are coming. We will purchase whatever amount of jabs is required to bring all the people under vaccination,” she added.

The Prime Minister thanked all the government officials for their brave role in tackling the Covid-19 onslaught, saying that the country’s situation could have worsened during the pandemic if they did not perform their duties accordingly.

The Premier added: “We’ve been successful whenever we took any work (due to their sincere efforts).

Sheikh Hasina said her government has been able to move the country towards a developing nation as it is in power for the third consecutive term after the 2008 national election.

But, she opined that the coronavirus is becoming an impediment to Bangladesh’s advancement, saying, “The coronavirus has plunged the entire world into a crisis. No such crisis was ever seen before. We have specified the work plan to overcome the crisis. “

She said that her government has announced 28 stimulus packages involving Tk 1,31,641 crore to keep running the lives and livelihoods amid the pandemic.

The Prime Minister said that her government has been giving topmost priority to ensuring socio-economic uplift of the grassroots people.

Sheikh Hasina said that Bangladesh will definitely advance towards the development following the spirit of the Liberation War as envisioned by the Father of the Nation overcoming all the hurdles including the Covid-19 pandemic.

The premier said that the government has introduced the method of APA in the 2014-2015 fiscal year for the public sector to ensure institutional transparency, accountability, proper utilization of resources and, above all, enhancing the institutional efficiency.

This is for the 8th time that such an agreement has been signed between the Cabinet Secretary on behalf of the Prime Minister and the concerned secretaries for the ministers.

On behalf of the Prime Minister, Liberation War Affairs Minister AKM Mozammel Haque later distributed crests and certificates among the top 10 ministries and divisions in the FY 2019-20 APA performances and integrity awards among top three ministries following receipt of the APAs signed for the FY 2021-2022.

Senior Secretary of Finance Division Abdur Rouf Talukder has secured the FY 2020-21 Integrity Award and spoke on the occasion while Senior Secretary of Information and Communication Technology (ICT) Division NM Zeaul Alam expressed his feelings as the ICT division secured first position in the APA performance.

A video documentary on the APA performance and its contribution to the country’s overall development was also screened.