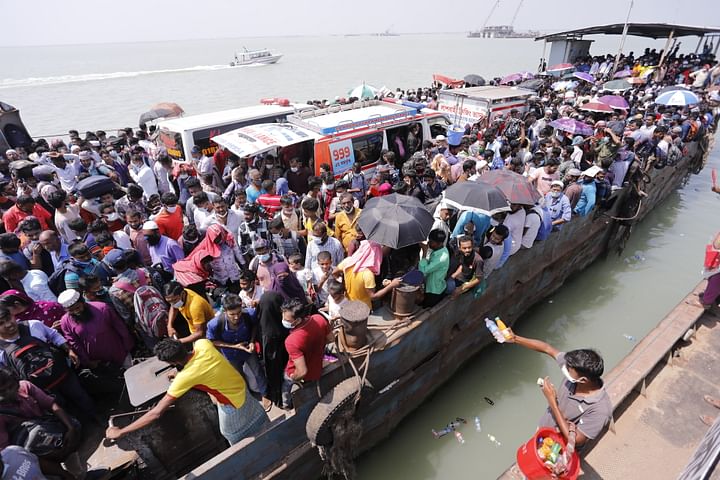 The ferry terminals in Munshiganj’s Shimulia and Madaripur’s Banglabazar are teeming with large crowds despite the ongoing lockdown restrictions on travel following the government’s announcement of factory reopenings.

Garment factories and other manufacturing plants will reopen from Sunday, which has pushed thousands of people to try and make the trip to Dhaka, according to BIWTC officials, reports bdnews24.com

Factories were closed from Jul 23 as part of the government’s efforts to curb the COVID pandemic, but pressure from factory owners has forced the government to backtrack.

On Friday, a notice from the Cabinet Division said that factories would be exempted from lockdown restrictions from 6 am on Sunday.

Scores of people have been crossing a rough Padma River since Saturday morning, while ignoring the health and social distancing directives.

As buses and other public transport are suspended amid the lockdown, people came to Banglabazar on motorcycles or three-wheelers on Saturday to catch the ferry.

Launch and speed boat services are also suspended, leaving ferries to bear the brunt of the passenger rush. People swarmed onto the vessels without heeding regulations and many were without masks.

“Garment factories reopen on Sunday,” said Shahadat Hossain, a passenger who travelled from Barishal. “We have to get to the factory and have faced many difficulties on the road. If the government had resumed public transport and launches, we wouldn’t be suffering like this.”

“We are poor people,” said a garment worker named Iti. “We have to work to eat, but the government isn’t doing anything for us. On the one hand, we are under a lockdown, but, on the other, factories are reopening. What are we to do? We only suffer. And we have to pay nearly ten times the usual rate to travel.”

Meanwhile, the Shimulia port is also overflowing with travellers as the authorities struggle to cope with the rush of passengers with the 10 ferries at their disposal.

Seven ferries are currently out of service after failing to cross the turbulent Padma with the heavy passenger load.

Passengers were streaming into the ferries even though the vessels are only operating to transport emergency service vehicles across the river.

“People are rushing to the ferry terminal like it’s a competition to see who comes first. The health and safety rule are nowhere to be seen. Many are not even wearing masks,” said Md Shafiqul Islam, assistant general manager of BIWTC.

Many are also trying to reach their destinations in covered-vans and Nasiman, a local passenger vehicle, after arriving at the terminal as public transports remain grounded. Deterred by the excessive fares, many are returning to the capital with their families on foot, said the BIWTC official.

Police, army and BGB personnel are working to enforce the lockdown restrictions at the terminal. Regular mobile courts are also being conducted for breach of health guidelines.