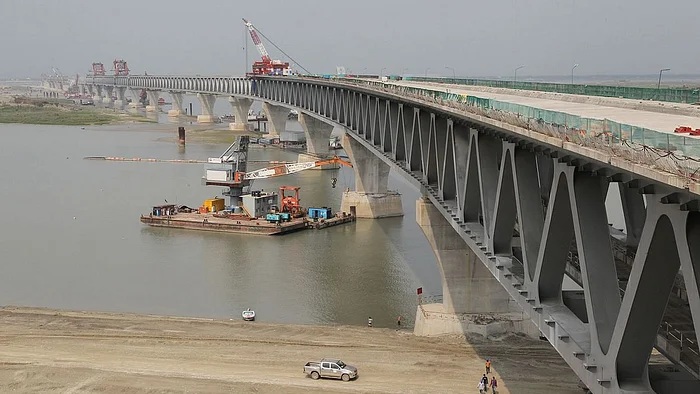 The government has decided to shift a ferry ghat following the collisions of ferries with Padma Bridge pillars several times.

Besides, the Ministry of Shipping has decided not to operate Ro-Ro ferries on Banglabazar-Shimulia route until the shifting of ferry ghat.

The decision has been taken in the wake of collisions of ferries with Padma Bridge pillars four times.

“The government has decided to shift Banglabazar Ghat to avert Padma Bridge on the way of movement of ferries. The ghat will be shifted to Majhirkandi Ghat under Janjira upazila in Shariatpur district. It will require one to one and a half months,” he said.

Within a span of just four days, Kakoli, a small ferry, collided with the Pillar Number 10 of Padma Bridge on Friday morning. The collision happened at about 6:45pm when the ferry was coming to Shimulia in Munshiganj from Banglabazar in Madaripur.

Following the incident, State Minister for Shipping Khalid Mahmud Chowdhury visited the place of occurrence in the morning. After visiting the affected pillar of the bridge, he told journalists that necessary repair work would be taken later on.

“Though the damages are minor due to the collision, we’re not taking it lightly. The driver’s negligence is also being investigated. Later, necessary steps will be taken,” he said.

Khalid Mahmud Chowdhury also said the government has planned to shift the Banglabazar Ferryghat in Madaripur district to Majhirkandi Ferryghat under Janjira upazila in Shariatpur district after opening of the Padma Bridge.