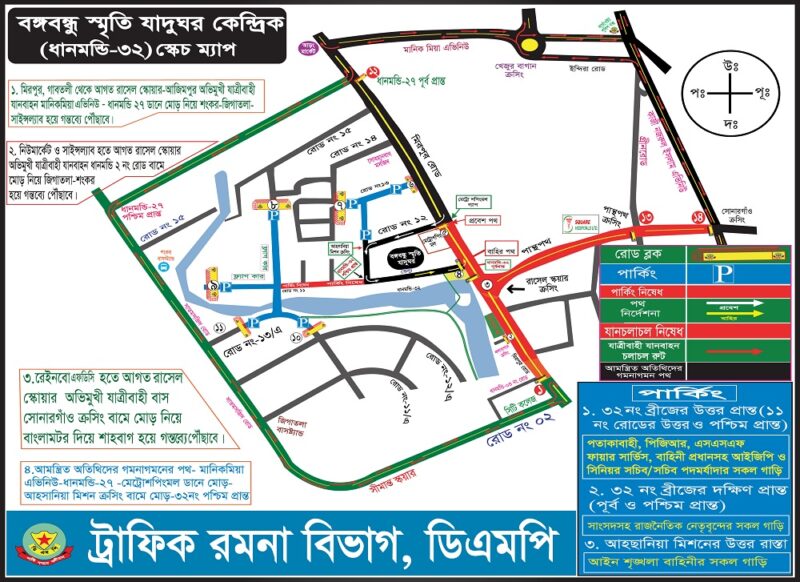 Dhaka Metropolitan Police (DMP) has issued a traffic directive on the occasion of the 46th martyrdom anniversary of Father of the Nation Bangabandhu Sheikh Mujibur Rahman and National Mourning Day on August 15.

The nation as well as city dwellers will observe the National Mourning Day tomorrow by paying rich tributes to Father of the Nation Bangabandhu Sheikh Mujibur Rahman at Dhanmondi 32.

The DMP will control traffic movement around Dhanmondi-32 area on the occasion of the National Mourning Day, said a press release.

Marking the day, the President and Prime Minister, Ministers and Awami League leaders, and a cross section of people will lay wreaths at the portrait of the father of the nation at Bangabandhu Memorial Museum here.

People concerned have been requested to follow DMP directives on the day in order to ensure smooth movement of vehicles and avoid traffic jams in the city, said the release.

The directions are; passenger vehicles coming from Mirpur-Gabtali towards Russell Square-Azimpur will take a right turn at Manikmia Avenue-Dhanmondi 27 and reach the destination via Shankar-Jigatla-Science Laboratory.

Passenger vehicles heading towards Russell Square from New Market and Science Laboratory will take a left turn of Dhanmondi Road No. 2 and reach the destination via Jigatala-Shankar.

The passenger bus coming from Rainbow FDC towards Russell Square will take a left turn at Sonargaon intersection and reach its destination via Shahbagh-Bangla Motor.