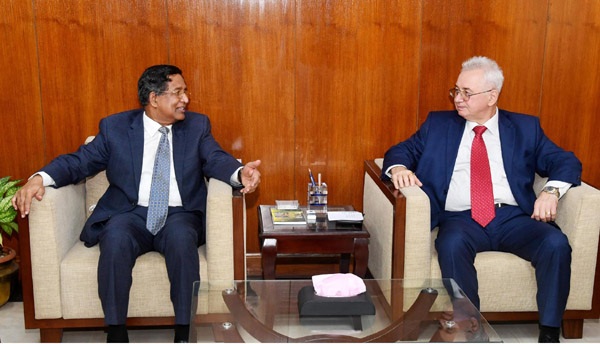 Bangladesh has shown interest to import di-amonium phosphate (DAP) and muriat of potash (MoP) fertilizers from Russia while Russia is interested to take Bangladeshi mangoes.

Both the countries expressed their interests when Russian Ambassador in Bangladesh Alexander Vikentyvich Mantytskiy called on Agriculture Minister Dr M Abdur Razzaque at his ministry office in Dhaka on Wednesday (August 18), reports BSS.

“Bangladesh is keen to import non-urea fertilizer from Russia under government to government (G2G) agreement,” said the minister, expressing interested to sign a memorandum of understanding (MoU) with Russia to this end.

“We want to import DAP and potassium fertilizers from Russia and also want to sign an MoU with Russia in this regard,” said Dr Razzaque, adding that DAP is now being sold at Tk 16 per kg and the price is four times lower than the earlier price of Tk 90.

Since 2013, Bangladesh has been importing MoP fertilizer under the G2G and a MoU still remains effective between the two countries.

During the meeting, the agriculture minister requested Russia to reconsider potato import from Bangladesh as standard quality potatoes are now being produced in the country.

Russia banned potato import from Bangladesh in 2014 after detecting brown rot, a bacterial disease, in potato.

“Bangladeshi mango is of high quality and very much tasty…there is a huge potential to export mango to Russia and we have a keen interest to import mango from Bangladesh,” the Russian envoy said.

He also assured that Russia will give necessary assistance to resolve the Rohingya problem as more than 10 lakh Myanmar nationals have been compelled to take shelter in Bangladesh due to ethnic violence in Myanmar.