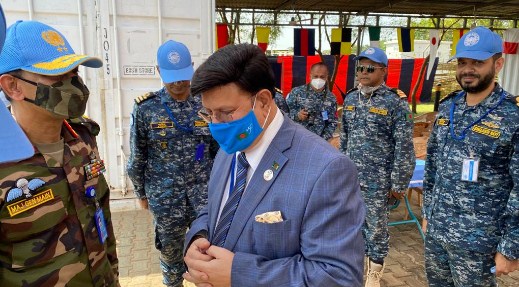 “Bangladesh is now the top most troops contributing country to the UN peacekeeping operations owing to the efficiency, acumen and professionalism of our peacekeepers,” he said.

Dr Momen said that Bangladesh government has facilitated the deployment of female peacekeepers in the UN Peacekeeping Operations as well as police units in different UN missions who have earned a lot of reputation with their performances.

“A monument may be built in the Dhaka Cantonment to pay tribute to the sacrifices made by our peacekeepers,” he suggested.

“Our peacekeepers have enhanced the prestige of Bangladesh internationally by dint of their dedicated and efficient services in the UN Peacekeeping Missions,” he said.

During the visit to the UNMISS, the foreign minister received gun salute from a smart contingent of Bangladesh peacekeepers and signed the visitors’ book.

During the interactions, the high officials apprised the Bangladesh foreign minister about the activities of the UNMISS and profusely praised the role of Bangladesh peacekeepers there.