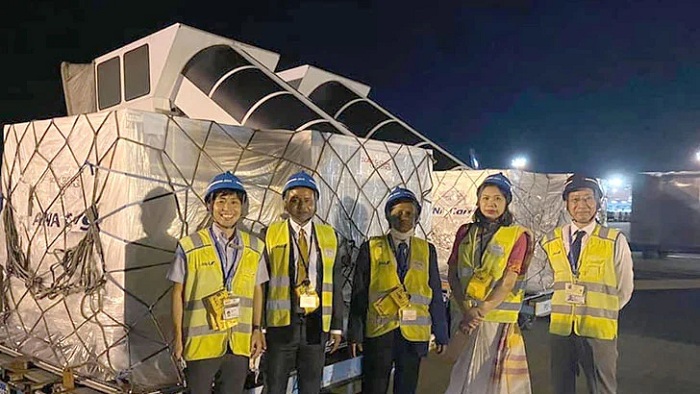 A consignment of more 7 lakh 81 thousand 440 doses of Oxford-Astrazeneca vaccine gifted by Japan to Bangladesh arrived in Dhaka.

A cargo flight of Cathay Pacific carrying the consignment landed at Hazrat Shahjalal International Airport in Dhaka at 3:25pm on Saturday.

Earlier, the flight left Narita International Airport in Tokyo for Dhaka at about 9:45pm (Japan’s local time) on Friday.

It was stated in the Facebook page of Bangladesh Embassy in Tokyo.

The embassy said the fourth consignment of Oxford-Astrazeneca vaccine gifted by Japan to Bangladesh was coming to Dhaka.

Bangladesh Ambassador to Japan Shahabuddin Ahmed was present at Narita International Airport when the cargo flight took off the tarmac.

The embassy further said a total of 24 lakh, out of 30 lakh doses of vaccine, gifted by Japan has been sent to Dhaka.