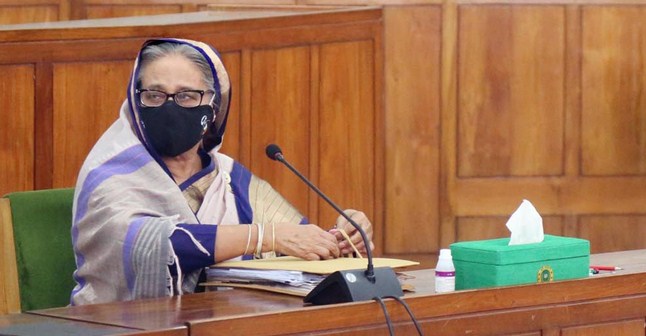 Prime Minister Sheikh Hasina on Monday directed the authorities concerned to design a separate programme to bring the industrial workers and their families under the Covid-19 vaccination coverage soon.

She also asked to consider whether it would be possible to shorten the existing two-month gap between two vaccine doses.

The Prime Minister made the directives while chairing the Cabinet meeting held through a virtual platform, said Cabinet Secretary Khandker Anwarul Islam at a press briefing, reports UNB.

Sheikh Hasina joined the meeting from her official residence Ganobhaban and others from the Cabinet Room of the Secretariat.

“A special discussion was held over the industrial workers today (in the meeting)…. Since Bangladesh would get six crore doses of vaccine from Sinopharm as per an agreement signed by the Health Ministry, the Prime Minister gave the instruction to vaccinate the workers quickly bringing them under a separate programme,” said the Cabinet Secretary.

Besides, the PM said that she would herself oversee the matter.

“The Prime Minister has given instruction to vaccinate not only the workers but also their family members as forerunners,” said Anwarul Islam.