Bangladesh to be turned into a global aviation hub: PM 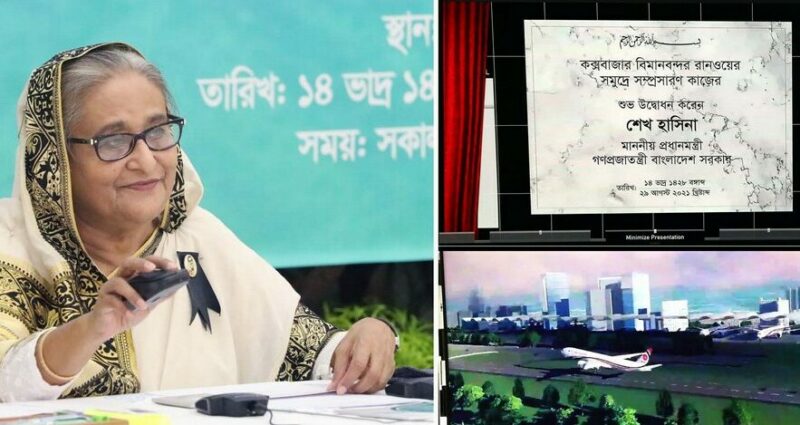 “Considering Bangladesh’s geographical position, we want to make the country the centre of global aviation so that our country is greatly benefited economically,” she said, reports UNB.

The Prime Minister said this while inaugurating the groundbreaking activities of the extension of Cox’s Bazar Airport runway.

She joined the programme from her official residence Ganobhaban.

Given the perspective of the aviation industry, Hasina said, the position of Cox’s Bazar is very significant.

In recent times, she said, Hong Kong, Singapore and Bangkok gained importance while Dubai is currently getting the greater attention right. “I can say, Cox’s Bazar will be the most important one in the future,” she said.

“Don’t look only at the Western countries. We’ll have to try to establish air communication with other countries, too,” she said.

With these aircraft, she said, the government wants to expand Biman’s routes, including New York, Toronto and Sydney.

She asked the Biman officials to work with honesty and sincerity and upgrade all the services, including security, to international standards.

The Prime Minister said the government wants to upgrade the Syedpur Airport to make it a regional airport so that Bhutan, Nepal and some Indian states can use it.

Voicing her frustration for not being able to utilise the new 16 aircraft of Biman, Hasina said these aircraft cannot be operated due to coronavirus.

She mentioned that the construction work on Hazrat Shahjalal International Airport (HSIA) third terminal is going on in full swing. “It’ll be the most modern one.”

She said there will be an underpass from HSIA to Airport Railway Station for the convenience of passengers.

About the development of Cox’s Bazar as a tourist spot, she said the government has many development plans for the area to attract more local and foreign tourists.

In this connection, the PM mentioned the Sonadia Eco Park which will be preserving all natural elements.

A video on the development of the aviation industry of Bangladesh was screened at the programme.