Some people damaged 300 Ashrayan houses with hammers and shovels: PM 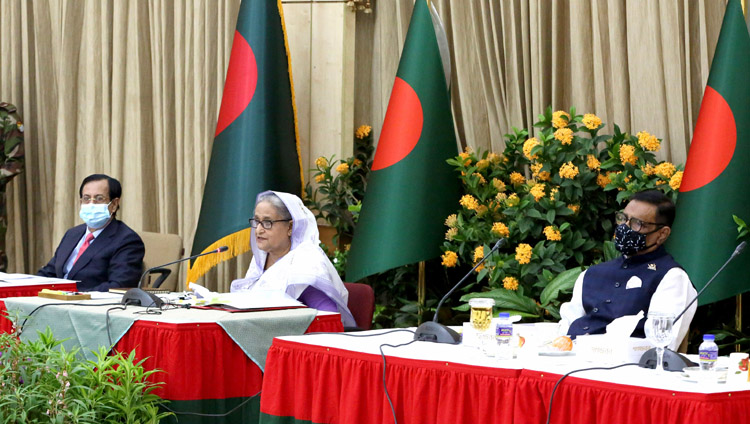 Blasting those who have hammered down the houses built under Ashrayan Project-2 for the landless people, Prime Minister Sheikh Hasina has said some people damaged nearly 300 houses with hammers and shovels.

“In different places of the country, some people damaged nearly 300 houses with hammers and shovels, and the media captured the pictures of those houses,” she said while addressing a meeting of the Awami League Central Working Committee held at her official residence Ganabhaban.

Hasina said she has got the full details of the culprits, including their names and others, after an investigation.

“The houses have been constructed for the poor people. Some people are so mean that they’ve damaged those. How is it possible? Can the houses built for the poor be demolished?” she said.

The Prime Minister, however, said there were allegations of corruption in nine places of the Ashrayan Project-2.

“Everyone worked sincerely. But some people came out with naughty minds. This was the most painful matter! How could they put their hands on the houses for the poor?” she asked.

Hasina said the government has so far built 1,50,000 houses and distributed those among the poor on the occasion of Mujib Year.

“A vested quarter intentionally spread falsehood of corruption in building the houses. Some houses have been damaged by landslides due to heavy rains.”

She said the government is moving ahead facing all these odds and obstacles, and urged the AL leaders and workers to be more vigilant.

Hasina, also the ruling Awami League chief, thanked all, including the mass people for their unwavering move to help the government make the project a success one.

Talking about Covid-19, Hasina said, the Awami League government has successfully tackled the pandemic as its organisational strength has extended up to the grassroots.

She mentioned that the party leaders and workers and its associate bodies stood beside people right from the outbreak of the corona pandemic risking their own lives.

The Prime Minister said no one from other parties were seen standing beside the Covid-19 affected people.

Praising all concerned for their efforts in tackling the Covid-19 situation, she said the public representatives, physicians, nurses, officials of the administration, police and members of the armed forces worked sincerely to face the pandemic.