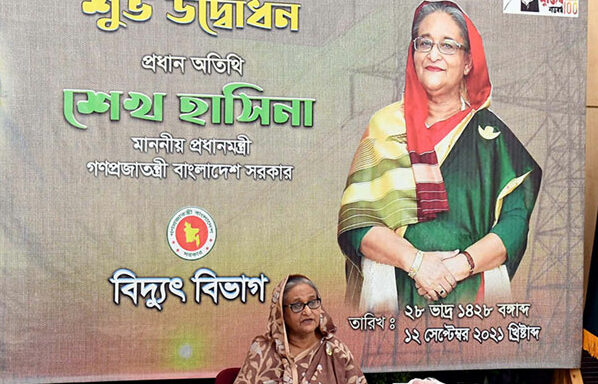 Prime Minister Sheikh Hasina on Sunday stressed the importance of keeping the environment in mind while taking any development project.

“We must focus on the environment while taking any project; we always should take protective measures before taking any step,” she said.

The Prime Minister said this while speaking at a programme to inaugurate five power plants with a total electricity generation capacity of 779 MW.

Hasina inaugurated the power plants through a videoconference from her official residence Ganobhaban as the programme was held at the Bijoy Hall of Bidyut Bhaban.

Requesting all to be careful about unnecessary usage of electricity, Hasina said, “If you don’t have any need, please turn the electricity switches off.”

She said how much the government could provide subsidies if people do not maintain austerity. “That should be taken care of (by consumers).”

Hasina said the main aim of the government is to extensively provide electricity to rural areas so that the scope of employment generation increases.

“The overall development of rural people is on top of our priority list. That’s why we’ve given the highest importance to communications and power lines,” she said.

Regarding the Covid-19 pandemic, Hasina said the government is providing vaccines for people so that no one is left out of it, no matter what the cost is.

She requested all to maintain health guidelines even after taking vaccines.

Hasina, however, admitted that the development pace in the country has suffered a setback due to the pandemic.

“There must not someone come who will again put Bangladesh under the chains of slavery again,” she said.

A video on the development of the power sector of the country was screened at the programme.

The Prime Minister also unveiled a book titled ‘100’ on the occasion.