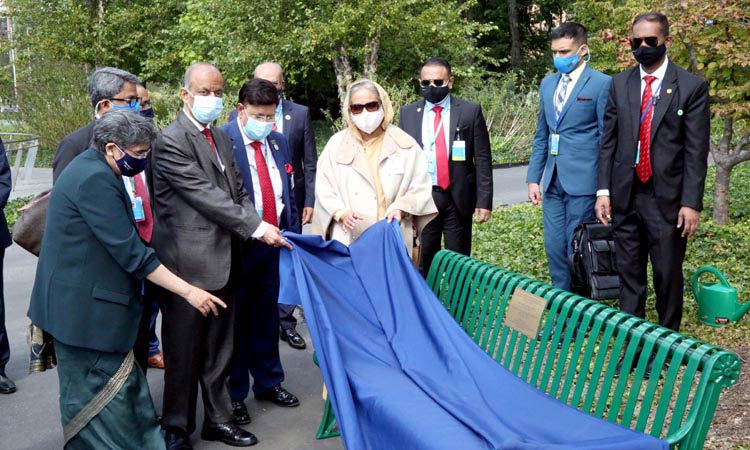 Prime Minister Sheikh Hasina on Monday planted a honey locust tree and unveiled a bench at UN gardens and dedicated these to Father of the Nation Bangabandhu Sheikh Mujibur Rahman on the occasion of his birth centenary.

She planted the deciduous tree at the North Lawn of the United Nations Headquarters in the morning (local tome).

Speaking on the occasion, the Prime Minister said the United Nations had recognized Bangladesh on September 17 after its independence. Immediately after getting the recognition, Father of the Nation Bangabandhu Sheikh Mujibur Rahman came to the UN and made his speech here on September 25 and which was delivered in Bengal.

“So, today a bench was dedicated to his name and a tree was planted in a very nice place here in the same month of September. The tree can survive for more than 100 years, which will continue spreading the message of peace,” she said, adding the bench and tree stand together to epitomize the values of peace.

Locust trees are a type of fast-growing flowering plant, belonging to the family of plants known as Fabaceae. Almost all Locust trees can survive for more than a hundred years and their wood is deemed harder than the strongest deciduous trees.

The Prime Minister arrived here on Sunday to attend the 76th session of the United Nation General Assembly.

Besides, Sheikh Hasina will join a number of sideline events in the UNHQ and will have talks with some leaders from September 20 to 24 during her stay in New York.