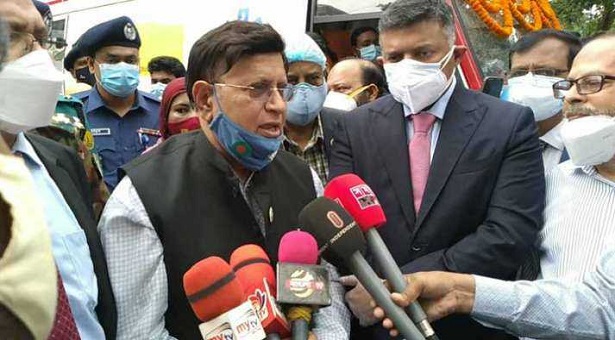 “There was a decision not to open fires along the Bangladesh-Myanmar border. But now, firing shots will be allowed (if necessary) to prevent illegal activities,” he said.

The Foreign Minister came up with the warning while talking to reporters at a function here.

Dr Momen said there has been a discussion with the Home Minister to take tough action to stop all kinds of smuggling along the Bangladesh-Myanmar border. “The Home Ministry will take a decision in this regard.”

Two ambulances, gifted by the Indian government, were handed over to Sylhet MAG Osmani Medical College and Hospital.

Earlier, a decision had been taken to stop firing along the Bangladesh-Myanmar border but illegal smuggling is still carried out along the border, said Momen.

Talking about the incomplete Sylhet Airport-Badaghat bypass, the Foreign Minister said the officials of Roads and Highways Department should quit their jobs for failing to complete the work.

The construction work on the 12-km Sylhet Airport-Badaghat bypass started in 2010 during the tenure of former Finance Minister AMA Muhith.

He also expressed dissatisfaction over the delay in implementing many development works and the negligence of the authorities concerned.

Referring to the development work on Sylhet Specialized Mother and Child Hospital, Momen slammed the authorities concerned for failing to upgrade the hospital to a 200-bed one hospital from the existing 100-bed hospital.

An amount of Tk 110 crore had been allocated for the development of the hospital but the authorities concerned spent only Tk 10 crore and returned the rest of the amount without upgrading it.

“They’ve just wasted the money allocated for the health sector of Sylhet and it happened just due to negligence of the authorities concerned,” he said.

Referring to the six-lane work of the Dhaka-Sylhet highway, Momen said the work has been divided into 13 sections and tenders for that of eight sections have been floated.

“The work on the Sylhet portion is being delayed due to the complexity in land acquisition,” he said, hoping that the work would begin soon.