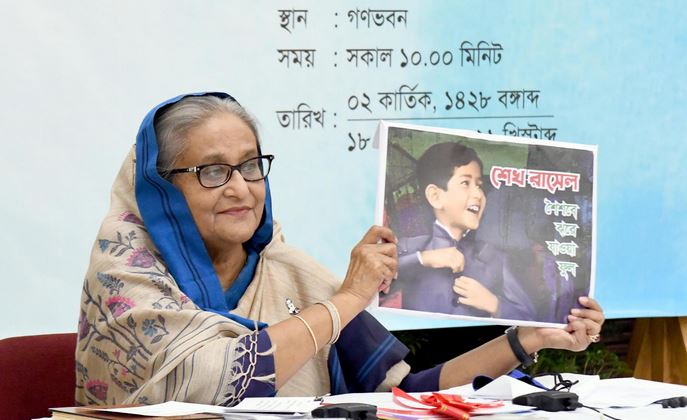 Prime Minister Sheikh Hasina on Monday urged the people of the country to properly groom their children with love and affection to make their lives meaningful and successful.

“Today’s children are tomorrow’s future. So, I would like to urge the people of the country to ensure their safety and give them love, develop their lives well, and thus make their lives successful and meaningful,” she said, reports UNB.

The Prime Minister said this while addressing the inaugural and award-giving ceremony of Sheikh Russel Day-2021 and Award virtually from her official residence Ganobhaban.

Sheikh Russel Jatiya Shishu-Kishore Parishad arranged the function under the supervision of the Information and Communication Technology (ICT) Division at the Bangabandhu International Conference Centre (BICC) in the city.

The Prime Minister said grooming children properly with affection should be the responsibility and ideal of all.

She said her government wants to build Bangladesh as a developed and prosperous ‘Sonar Bangla’ with a non-communal spirit where there would be no injustice and people would enjoy a decent life.

Describing education as an invaluable wealth for them, Hasina urged the children to be attentive to their studies and learn good things from the digital space in this era of technology.

“This wealth (education) can never be lost or no one can snatch it. Education is the biggest asset in one’s life,” she said.

The Prime Minister said the government is expanding the scope for digital education as it is now the modern and technological era. “Today, the world is in our hands as everything can be known from there. So, you’ve to learn only good things from it and build yourselves properly,” she said.

Nothing to worry about not being invited by US for summit: Momen

Half fare in BRTC buses for students from December 1