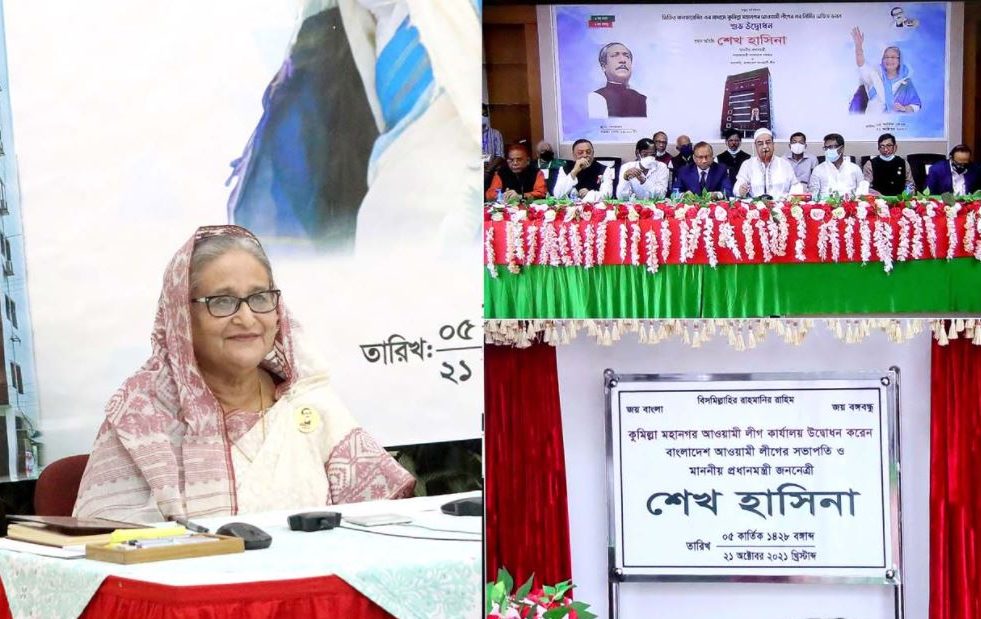 Describing the recent incident in Cumilla as very unfortunate, Prime Minister Sheikh Hasina on Thursday asked the Awami League leaders and activists to intensify their vigilance to maintain communal harmony across the country, reports UNB.

“Communal harmony has to be maintained. Our leaders and activists should intensify their monitoring in every area,” she said while virtually opening the newly-constructed office building for Awami League’s Cumilla City Unit from her official residence Ganabhaban.

Sheikh Hasina, also the AL president, asked her party leaders and activists to take initiatives for holding ‘peace conferences’ and bringing out ‘peace processions’ so that no conflict can occur and people from all religions like Muslims, Hindus, Christians and Buddhists live in a peaceful life on this soil.

What happened in Cumilla, she said, is very unfortunate. “Islam never allows disgracing the religions of others. Alongside respecting one’s own religion, one has to respect others’ religions as well,” she said.

The Prime Minister said if the religions of other communities are vilified, it ultimately demeans one’s own religion. “If we analyze the Cumilla incident, we would see our holy Quran was defamed while going to undermine other religions, which is very unfortunate.”

The Prime Minister urged people not to take law into their own hands. “If anyone commits an offence, the perpetrators would have to face justice, no matter who he or she is. Our government would try them.”

She said the Prophet (SM) asked not to do excesses over the religion. “Everyone must know, keep it in mind and follow it,” she added.

Referring to the recent incidents of breaking communal harmony, including in Cumilla and Pirganj of Rangpur, the Prime Minister said the government took all sorts of arrangements for the victims like providing them with dry and cooked foods, clothes and treatment.

“We’ll build houses for all the victims. We’ve already taken this step,” she said, adding that Awami League is always with victims.

When her government is taking the country forward in every sector, the Prime Minister said there is a section of people here who cannot tolerate the progress. They, particularly BNP-Jamaat and Khaleda, do not want Bangladesh to move on raising its head high with dignity because of their love for Pakistan.

Focusing on her government’s development activities for Cumilla, Hasina said she has decided to upgrade Faridpur and Cumilla into new divisions after the names of the country’s two major rivers – Padma and Meghna.

The PM said she will form Cumilla division after the name of ‘Meghna’ while Faridpur after that of ‘Padma’.