World has to share responsibilities of climate migrants: PM 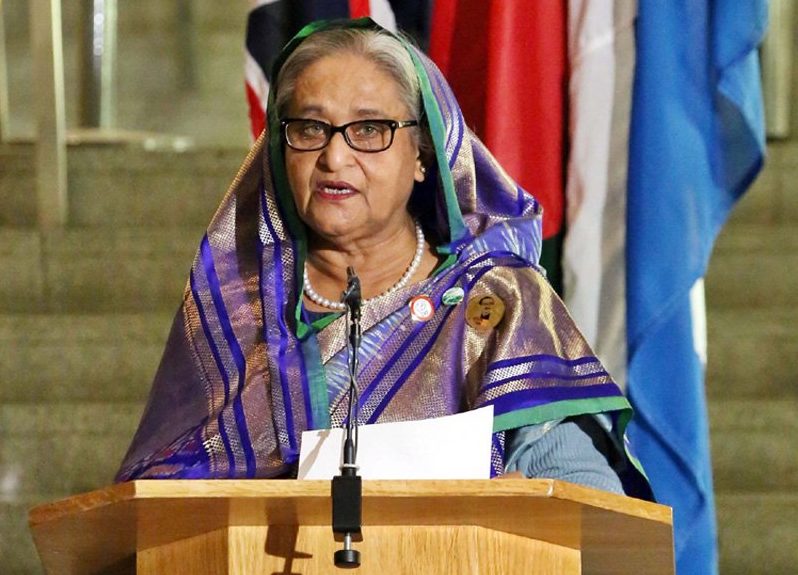 Prime Minister Sheikh Hasina on Tuesday said the world would have to share the responsibilities of the climate migrants, as she addressed the Scottish Parliament here at an event titled “Call for Climate Prosperity”.

“The world has to share the responsibilities of the climate migrants – the people displaced because of climate change induced natural events like sea-level rise, river erosion, increasing salinity, floods and draughts. The issue of loss and damage must be addressed properly,” she said, reports BSS.

The premier was presenting the keynote speech titled “A Bangladesh Vision for Global Climate Prosperity” at the Committee Room, the Scottish Parliament on tuesday.

Speaker Alison Johnstone received the Bangladesh premier on her arrival at the Scottish Parliament.

Mentioning that effective and adequate climate finance mechanism is the key for achieving prosperity, she put forth some proposals for successful implementation of the MCPP.

Placing a proposal, Sheikh Hasina, also chair of the Climate Vulnerable Forum (CVF) and the Vulnerable20 (V20), said, “The major emitting countries must submit and implement aggressive NDCs (Nationally Determined Contributions). Without ambitious mitigation efforts, only adaptation measures are not sufficient to slow, stop and then reverse the adverse impacts of climate change.”

The Prime Minister in another proposal said that developed countries must fulfill their commitment of providing 100 billion dollars annually to the developing countries for addressing climate change, with special focus on the climate vulnerable countries.

She also said that these amounts should be in addition to the existing ODA (Official Development Assistance), and there needs to be synergy among the different climate funds.

“The distribution of the climate fund should have a 50:50 ratio between adaptation and mitigation,” she added.

In the last proposal, the Prime Minister suggested dissemination of green technology from developed countries to developing countries at affordable cost so that the plans like the Mujib Climate Prosperity Plan can be realized.

Sheikh Hasina said that the world leaders have gathered in Glasgow to demonstrate resolve and ambition on climate action combining their global collective efforts to respond to the unprecedented challenges and risks of the adverse impacts of climate change from which no country is immune.

She described the recently published IPCC (Intergovernmental Panel on Climate Change) 6 Assessment report as “yet another wake-up call” for the globe to take decisive actions now to save the planet from temperature rise that cannot be reversed, and a climate disaster.

“We are facing the most serious global challenge of humankind. It is a major threat for climate-vulnerable countries like Bangladesh though we contribute less than 0.47 per cent of global emissions,” she said.

Describing sea-level rise induced by global warming as a serious threat for Bangladesh, she said,” With a 1-meter rise of sea-level, tens of millions of people in the coastal area of Bangladesh will be displaced.”

The premier said that every year two per cent of Bangladesh’s Gross Domestic Product (GDP) is lost due to adverse impact of climate change, and it may go up to nine per cent in the coming decades.

“Although we are climate vulnerable, at the same time we are globally recognized for our resilience,” she said, referring to her government’s various measures to face the adverse impact of climate change.

Prime Minister said that the government of Bangladesh, with its own financing, has established the Bangladesh Climate Change Trust Fund (BCCTF).

Under this fund Bangladesh has undertaken 800 projects so far with an investment of USD 480 million, which mainly focuses on adaptation, mitigation, and climate change research, she added.

“We have adopted the “Bangladesh Delta Plan 2100″, a comprehensive 100-year strategic plan aimed at gradual, sustainable development through adaptive delta management process targets to achieve a safe, climate-resilient and prosperous delta. Currently, the country is advancing and formulating a National Adaptation Plan (NAP) that will significantly enhance our adaptation ambition,” she continued.

“Our updated and enhanced NDC has expanded its emission coverage from only the energy sector to the country’s whole economy, ” she added.

About measures to cut carbon emissions, she said Bangladesh is committed to following a progressive approach to developing its economy on a low carbon pathway.

“The country has taken several initiatives on renewable energy for reducing greenhouse gas emissions as well as promoting green energy. We have recently cancelled ten projects of coal-based power plants worth 12 billion dollars of investment,” she told the Scottish Parliament.

Describing Bangladesh’s plan to generate energy from renewable sources for the sake of the environment, Sheikh Hasina said that she is happy to inform that in Bangladesh 6.5 million households have solar power for domestic use, one of the largest amount of off-grid solar power generations in the world.

“We have the target of generating 40 percent of our energy from renewable sources by 2041. We are also procuring electric locomotives for our mass transit system, further reducing our carbon footprint. Bangladesh has already started working to introduce a significant number of electric cars within the next few years. Charging stations for these cars will be set up all across the country,” she said.

The Prime Minister said, in celebration of the birth centenary of the Father of the Nation Bangabandhu Sheikh Mujibur Rahman, her government is planting 30 million saplings across the country.

Additionally, to reduce the risk of death from lightning strikes, the government has planted 5.4 million palm trees, further contributing to carbon sink, she added.

The premier said, “As we need to focus on overcoming risks and becoming prosperous despite those prevailing risks managing the adverse risks of climate change, we set our trajectory from one of vulnerability to resilience to prosperity (VRP).”

Bangladesh will soon launch the “Mujib Climate Prosperity Plan,” a strategic investment framework named after the Father of the Nation to mobilize financing, including through international cooperation, for implementing renewable energy generation and climate resilient initiatives, she added.

She continued that this climate prosperity plan has elements like setting up a large number of offshore power generating wind turbines, reconversion of existing fossil-fuel power plants with up skilling of the workforce, creating locally led adaptation hubs that will come up with innovative solutions to adapt with climate change, and to take steps for mental and overall wellbeing, with focus on climate related diseases.

To this end, she said, “Our Delta Plan 2100 has also been taken into account while developing the Mujib Climate Prosperity Plan.”

The premier said her government is also planning to re-build and reinforce the embankments in the coastal region as well as in the areas prone to river erosion as part of adaptation measures.

The Prime Minister said that Bangladesh expects to achieve transformative change through MCPP by leapfrogging in a number of technological and economic fronts.

“We also hope to be able to access the global funds available for green investment and enhance the quality of education and capacity building of our youth. This will help us to reach the target of a developed country status faster,” she added.