Bangladesh can produce Covid vaccine, let us do it: PM 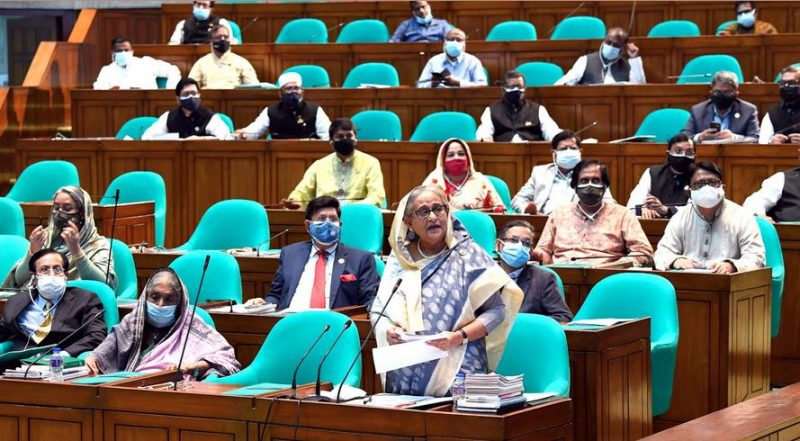 Bangladesh is capable of producing Covid-19 vaccine and exporting the jabs to other countries provided it gets the go-ahead, Prime Minister Sheikh Hasina said in Parliament on Monday.

She said this while participating in a discussion on a resolution to thank UNESCO for introducing “The UNESCO-Bangladesh Bangabandhu Sheikh Mujibur Rahman International Prize for the Creative Economy.”

Awami League lawmaker Abdus Shahid placed the resolution in the House under Section 147 of the Rules of Procedure, UNB reports.

The prime minister said during her recent tour of the United Kingdom and France she told the world leaders that Bangladesh wants to produce coronavirus vaccine and if they let the country do so.

“I told them to remove all barriers to produce coronavirus vaccine in Bangladesh, this is the right of the people of the whole world, this should be declared as the global public good,” Hasina said.

She mentioned that if Bangladesh gets the chance it would produce vaccine as it has that capability and the government has already allotted a land for the purpose.

“We can also supply vaccine to the world,” she said.

Sheikh Hasina said that Bangladesh got global recognition for its success in tackling Covid-19 pandemic.

Referring to Bangabandhu’s massive efforts at rebuilding the war-ravaged Bangladesh after independence she said that in just three and a half years of time the great leader had put the country on the track of development.

“We want to advance the country following the footsteps and ideology of the Father of the Nation,” she said.

“We have proven that Bangladesh can be developed,” she added.

The Leader of the House thanked the people of the country for supporting her party and cast their votes in favour of the party’s candidates in the elections repeatedly.

“We have been trying our level best and Bangladesh has got a dignified position in the world within a span of 12 years,” she said.

Talking about the youth folks she said that the government has taken numerous steps for the development of the country’s youths.

She mentioned that the government has launched start-up programme from which the young entrepreneurs can get fund to start their businesses.

The UNESCO-Bangladesh Bangabandhu Sheikh Mujibur Rahman International Prize for the Creative Economy was established in 2020 to recognise and reward exceptional initiatives of an individual or organization that support young entrepreneurs in the field of the creative economy.

Prime Minister Sheikh Hasina handed over the prize to MoTIV, a Uganda-based integrated creative studio at a function in Paris on November 11.

Talking about the award ceremony Hasina said that her sister Sheikh Rehana presented a bouquet to the MoTIV representative on behalf of the people of Bangladesh.