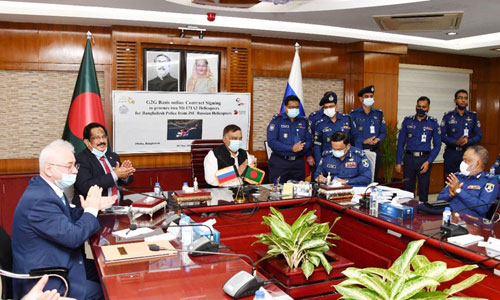 Bangladesh Police have signed an agreement with JSC Russian Helicopters to procure two MI-171A2 helicopters, to enhance the capacity and efficiency of the law enforcement agency and ensuring better public safety, reports UNB.

Inspector General of Police (IGP) Dr Benazir Ahmed and Director General of JSC Russian Helicopters Andrey Boginskiy signed the agreement on behalf of their respective organizations on Friday, according to a media release of Police headquarters.

On October 6, the cabinet committee on economic affairs (CCEA) gave in principle its approval to the proposal.

As per the proposal, the Bangladesh Police Directorate will procure the Russian Mi-171A2 model helicopters from Russian firm JSC Russian Helicopters under a G2G contract at a cost of Euro 42.60 million, equivalent to Tk 428.12 crore.

On February 10 this year, a memorandum of understanding (MoU) was signed between the Bangladesh Police and helicopter manufacturer JSC Russian Helicopters for the purchase of helicopters on a government-to-government (G2G) basis.