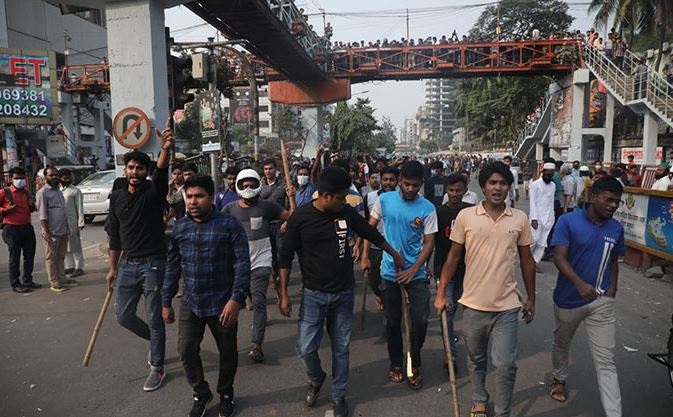 Several students were injured in a clash between two groups after the ending of students’ protest at Dhaka’s Science Lab intersection on Tuesday noon, demanding the half bus fare.

Witnesses said at around 1.30 pm, when the agitating students were leaving Science Lab intersection after ending their protest programme a group of Bangladesh Chhatra League activists reportedly attacked them with sticks, rods and other local weapons, leaving several students injured.

At that time, an agitating student was seen dragging by the ruling party activists inside Dhaka College.

The protesting students allege that before the attack, BCL leaders and activists argued against them for vandalizing a motorcycle parked on the side of the road. They were attacked with sticks during the attack and several students were injured at that time.

An injured student alleged that at the end of the programme, the agitating students were preparing to bring out a procession from Science Lab to New Market. Leaders and activists of Dhaka College unit Chhatra League attacked the procession alleging vandalism of motorcycles.

Students say that after the first phase attack, when the students gathered at the corner of Science Lab, BCL men attacked them again. They attacked and beat all students of schools and colleges whoever they found on the streets.
After the attack, they went inside Dhaka College chanting ‘Joy Bangla’, ‘Joy Bangabandhu.

Earlier, at around 12:30 pm, college students from different colleges in the city blocked Science Lab intersection demanding half fare on public transports.

Agitating students said they also placed the same demand of half fare on public transport during the last road safety movement but it has not been implemented even after a long time.

“The administration is wasting time. Students have taken to the streets again to get their demands met,” they said.

Shaheen Shah Mahmud, ADC of New Market Zone, said, “A chaotic situation was created over the vandalism of a Dhaka College student’s motorcycle. We calmed both parties down and sent them to their respective colleges.”

The situation is under control now, he added.