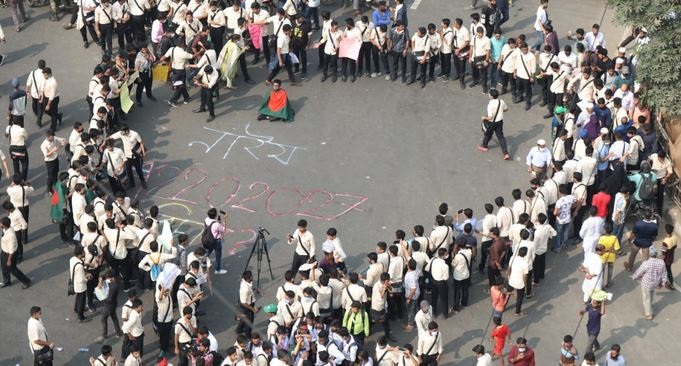 They threatened that they will again take to the street from Sunday if their demand is not met by this time.

The students’ protest paralysed the city’s Gulistan and its adjacent roads. The demonstration, however, spread in the whole city.

A group of 300-400 students of college with different placards started demonstration from 11:30am in front of Shapla Chattar demanding justice for the death of their fellow Nayeem Hasan by an accident.

They, later, proceeded towards RAJUK bhaban and left for Gulistan.

At that time, the protesters were chanting different slogans–“We want justice”, “We want safe road”.

On Wednesday morning, a Zero-Point bound garbage truck of Dhaka South City Corporation (DSCC) crashed Nayeem at Gulistan area when he was crossing the road in front of Gulistan Hall Market, leaving him critically injured.

Hearing the death news, his fellows took to the street demanding punishment of those involved in the accident.

Police, however, arrested the driver of the killer vehicle.

A three-member probe committee, led by chief waste management officer of DSCC Air Commodore Sitwat Naeem, has been formed which has been asked to submit the report within seven working days.